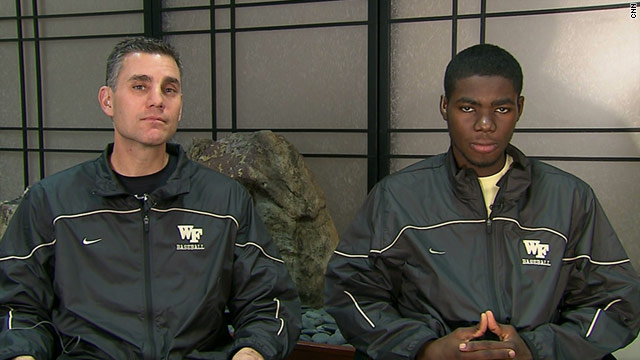 "I have a strong sense of family," Tom Walter said, sitting next to Jordan, on CNN Wednesday. "When we recruit these guys, we talk about family and making a sacrifice for each other and believing something greater than the individual. This is a decision that most everybody would make for a family member."

Jordan has a rare immune condition that causes blood vessel damage. He had struggled to keep up with demands of homework and athletics at Wake Forest last semester while enduring hoursÂ per day of dialysis. But the teenager became sicker in recent weeks.

In late January, Walter announced to the Wake Forest Demon Deacons that he planned to give a kidney to a freshman who had not even played in a game yet. Walter explained that he stepped in after learning that none of Jordan's relatives matched the athlete's rare blood type.

"I would have been disappointed if I hadn't been [a match]," Walter said.

The stunned players broke out in applause, the coach recalled.

Jordan could have gone to the minor leagues after high school in Columbus, Georgia. He was picked by the New York Yankees in the 19th round of the 2010 amateur draft. But Wake Forest seemed like a better choice, both for its baseball program and academics, he said.

On Wednesday, Jordan laughed. The decision to go to college actually "preserved a little bit of life," he said.

Walter "may not think he's a hero, but he's definitely a hero to my parents, my family and me," Jordan said.

The coach said he doesn't feel like a hero. "I just did the right thing," Walter said.

Jordan will spend next semester at home recovering. Walter said he felt good enough to get back to coaching. Wake Forest plays its first game of the season next week.

Record-breaking rains and heavy flooding have killed at least 150 people in India and Nepal this week, according toâ€twitter.com/i/web/status/1â€¦Br
CNNweather

7:13 am ET October 21, 2021 RETWEET
As India celebrated passing the milestone on Thursday, some experts warned the pandemic threat was not over -- in aâ€twitter.com/i/web/status/1â€¦SM
cnni

7:00 am ET October 21, 2021 RETWEET
.@JohnKingCNN revealed that he has multiple sclerosis and stressed how important being vaccinated is to help protecâ€twitter.com/i/web/status/1â€¦dV
cnni