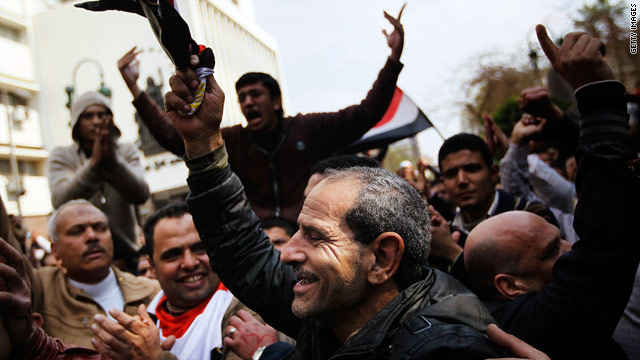 Anti-Mubarak protesters near the parliament building in Cairo Wednesday.
February 9th, 2011
10:23 AM ET

Muslim Brotherhood speaks - After more than two weeks, protests to oust Egyptian President Hosni Mubarak are still going strong. At the same time, a controversial Islamist umbrella group in the country is saying that it wants to promote democracy and will not offer a presidential candidate. The Muslim Brotherhood said through its media office in Cairo that it wants to "participate, not dominate." The group has attracted much attention because some have expressed fear that it would hijack Egypt's pro-democracy movement. Influential political figures across the world have raised concerns over the group. Others have argued that the Brotherhood should have a seat at the table and be recognized as a legitimate party. What is the Muslim Brotherhood? Why did the protests begin?

Phasing out Fannie and Freddie - The Obama administration says it will explain later this week how it plans to phase out housing financing giants Fannie Mae and Freddie Mac. The publicly traded companies represent major liability for taxpayers who are on the hook for billions of dollars in federal aid Fannie and Freddie received. But getting rid of them could raise borrowing costs for homeowners and further weaken an already fragile housing market.

Lohan charges coming? Prosecutors are expected to formally charge actress Lindsay Lohan with felony grand theft related to a necklace allegedly taken from a California jewelry store in January. The charge comes five weeks after Lohan was released from court-ordered drug rehabilitation and less than three weeks before a judge said he might free her from supervised probation from a 2007 drunken driving conviction.

More snow - Another huge snow storm is slamming Oklahoma and working its way into the Deep South. It snowed in Dallas on Wednesday morning. That city is predicted to get at least 4 inches.

Gene Simmons is getting serious about art. The co-founder of KISS spoke to CNN about how he began painting during‚Ätwitter.com/i/web/status/1‚Ä¶RV
cnni

6:04 pm ET October 22, 2021 RETWEET
Forests have long been celebrated as the natural heroes in the fight against the climate crisis. But while we are‚Ätwitter.com/i/web/status/1‚Ä¶CE
cnni

5:13 pm ET October 22, 2021 RETWEET
The launch of Artemis I, an uncrewed mission serving as the first step of NASA's ambitious program to return humans‚Ätwitter.com/i/web/status/1‚Ä¶PC
cnni