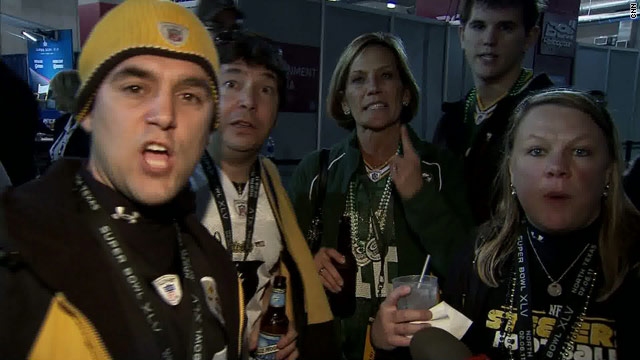 Fans react angrily after being told their tickets would not get them seats inside the stadium for the Super Bowl.
February 9th, 2011
12:17 PM ET

Imagine traveling thousands of miles, shelling out even more dollars and getting to the Super Bowl, arguably the biggest day of your life as a fan, only to find out that you don't have a seat.

That's exactly what happened to roughly 400 fans at Super Bowl XLV. Now, the NFL is sweetening its offer after robbing the group of its Super Bowl experience.

The 400 fans were forced to give up their seats at last week's Super Bowl after fire marshals deemed a section of Cowboys Stadium incomplete and uninhabitable. The decision was made just hours before kickoff and left a large cluster of die-hard fans displaced and displeased.

The NFL originally offered to give ticket holders a refund of $2,400 - or three times face value of their tickets - but the fans' complaints grew louder and the NFL was forced to up the ante.

On Monday, NFL Commissioner Roger Goodell promised those fans a ticket to next year's Super Bowl in Indianapolis. But the fans - mostly Packers and Steelers enthusiasts - will be getting even more for their troubles now.

The NFL followed up Tuesday, announcing the 400 fans could choose from a ticket to any future Super Bowl, including next year's, along with airfare and hotel, or the original $2,400 payout.

"We had more time to think about how to create a broader range of options that would better recognize the deep emotional bond that fans have for their team," NFL spokesman Greg Aiello wrote in an e-mail to The Associated Press on Tuesday.

After falling 101-85 to Orlando on Tuesday, Blake Griffin and the Clip Show take their act to Madison Square Garden to face the Knicks.

One of college basketball's greatest rivalries resumes tonight when the Tar Heels hope to avenge a season sweep by the Blue Devils last season. Duke (21-2) hosts UNC (17-5) at Cameron Indoor Stadium, where Duke has won 32 in a row.

2 - Three-pointers Celtics guard Ray Allen is short of Reggie Miller's career total of 2,560, the most in NBA history. Allen can break the record Thursday when Boston hosts the Los Angeles Lakers.

7 - Days the St. Louis Cardinals have left to reach a contract extension with three-time NL MVP Albert Pujols. The slugger said he would cut off contract negotiations for the season when he reports to training camp on February 16.

35 - Losses for the Cleveland Cavaliers in their last 36 games after losing an NBA-record 25th consecutive game Monday. The Cavs look to snap their streak tonight when they host the Pistons (7 p.m. ET).

The Taliban denied claims that Afghan girls would be banned from secondary schools after calling on boys to resume‚Ätwitter.com/i/web/status/1‚Ä¶AB
cnni

2:44 pm ET September 18, 2021 RETWEET
The CIA warned the military that civilians, including possibly children, were present seconds before a US missile k‚Ätwitter.com/i/web/status/1‚Ä¶zT
cnni

1:49 pm ET September 18, 2021 RETWEET
Notre Dame cathedral is on track to reopen to the public in 2024 as the cathedral has now been entirely secured, tw‚Ätwitter.com/i/web/status/1‚Ä¶V6
cnni