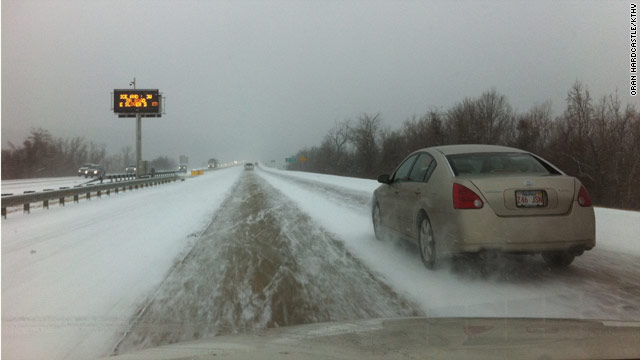 Weather conditions were tricky for drivers on some Arkansas highways on Wednesday.
February 9th, 2011
08:58 PM ET

Wednesday's snow and frigid temperatures in parts of the central and southern United States were a cold slap in the face for states still trying to recover from last week's unusually strong snowstorm.

Here's how people in some of Wednesday's snow-hit states were dealing with the latest round of storms:

With northwestern Arkansas receiving up to 25 inches of snow Wednesday and the Little Rock area getting around 5 to 8 inches, police and Arkansas National Guard troops were busy trying to help motorists who became stranded on highways.

In northwestern Arkansas' Benton County, Gary McLennan spent part of Wednesday morning digging out his wife's SUV from a ditch the vehicle had entered, he told CNN affiliate KFSM. He said he previously had tried to persuade his wife not to go to work.

Multiple media outlets reported jackknifedÂ tractor-trailers on the state's highways. The storm caused many highway motorists to pause at rest stops. Among those taking a break Wednesday were the Harlem Globetrotters basketball team, whose bus driver pulled over while trying to drive the club from Little Rock to a Wednesday night game in Memphis, Tennessee.

The amount and speed of the snowfall surprised one of the Globetrotters, Arkansas native "Flight Time" Lang, who told CNN affiliate KLRT that he hadn't seen anything similar in Arkansas since he was about 8.

"I can remember waking up this morning at about 7 o'clock and looking out the window, and there was nothing on the ground. And then once we left the hotel at 10, there was snow everywhere so it came down fast," Lang told KLRT.

The bus eventually left the rest stop, and the GlobetrottersÂ - who played in North Little Rock onÂ TuesdayÂ night - were expected to get to their Wednesday night game in Memphis on time, KLRT reported.

Many businesses in Little RockÂ closed onÂ Wednesday, much to the dismay of Tim Blades, a Maryland resident whoÂ was in townÂ on business. He told KARK that he is used to stores staying open during snowstorms.

"I came to go to a movie because there's nothing else open, and this (theater)Â isn't open," Blades told KARK, "so now we got to drop back and punt, I guess."

But Ed David, owner of Little Rock's Faded Rose restaurant, went to great lengths to keep his place open. He picked up several of his employees so they could work Wednesday.

"IÂ figure there are a certain amount of people who get caught and don't have food or a place to eat, and if I'm in the service business, which I am, I ought to be providing that service," David told KARK.

Parts of Oklahoma received more than 20 inches of snow Tuesday nightÂ into Wednesday, according to CNN affiliate KOTV. But even the 5+ inches that Oklahoma City got during that periodÂ was significantÂ for residents who still were digging out from the 12 inches they saw last week, CNN affiliate KOCO reported.

Logan Brooks, who stayed inside his home for a good chunk of last week, was shoveling outside his Oklahoma City home on Wednesday, trying to free a path that would let him drive away.

Oklahoma City resident and Canada native Terry PargeterÂ told KOCOÂ that he's surprised this much snow could fall in this part of the country.

"I moved down here to get away from all this. I can't believe it," he told KOCO.

Some 80 people in Oklahoma were injured as a result of the storm, the state Department of Health said Wednesday. That included 63 falls, 14 traffic injuries, one carbon monoxide poisoning and two "cut/pierce" injuries.

The Oklahoma Turnpike Authority said its snowplow drivers had barely recovered from working last week's storm when they had to fight this week's.

"They are tired; they haven't had any break at all," the Turnpike Authority's Jack Damrill told KOCO. "They've had about a day to rest. Other than that, they've been fixing trucks."

This month's weather has caused plenty of school cancellations.Â Tulsa's public school district has had nine closure days this school year as of Wednesday, though it had built only three of them into the calendar. The district, on its website, is asking parents to help administrators decide how to make up for the rest. Options include adding time to each school day, adding Saturday classes and cutting into spring break.

Parts of northern Texas received up to 2 inches of snow on Wednesday. But snow was only part of the difficulty that residents faced, with wind chills in the single digits Wednesday afternoon and poised to get lower, CNN affiliate KTVT reported.

The wintry weather was enough to cancel 12% of Wednesday's flights at Dallas-Fort Worth International Airport, according to Dallas Aviation Department spokesman David Magana.

"We didn't expect four days in a row where we couldn't get to them (last week)," Tom Hauser, who represents a Collin County group that runs a Meals on Wheels program, told KTVT.

Check this state Department of Transportation map for road conditions.

Over a thousand fanged enthusiasts have broken a Guinness World Record amid the gothic ruins that inspired Bram Stoâ€twitter.com/i/web/status/1â€¦ED
cnni

5:11 am ET May 28, 2022 RETWEET
Imran Khan's claims of a US-led conspiracy against him have become a staple at the many rallies he has held acrossâ€twitter.com/i/web/status/1â€¦W8
cnni

12:00 am ET May 28, 2022 RETWEET
Choose your color -- red or white. The bars and stands around Paris' Stade de France, the venue for Saturday's Chamâ€twitter.com/i/web/status/1â€¦Ib
cnni