All 30 NATO world leaders practice social distancing as they pose for a photo and begin their summit in Brussels. Fâ€twitter.com/i/web/status/1â€¦vi 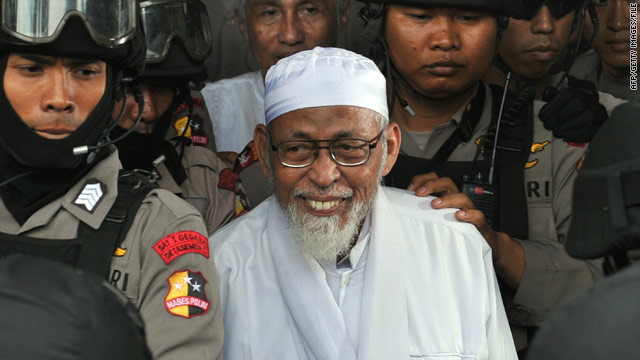 More than 1,200 police will be at the ready as radical Muslim cleric Abu Bakar Bashir goes on trial on terrorism charges Thursday in Jakarta, according to reports from Indonesia.

Hundreds of the cleric's supporters were expected to rally outside the court Thursday, but only a few will be allowed inside the courtroom, the Jakarta Post reported.

Bashir, 72, faces charges including funding and inciting others to terrorism and planning and attempting acts of terrorism. Under Indonesia's anti-terrorism law, some of these charges carry the maximum penalty of death, according to a statement by the attorney general's office.

The charges stem from the discovery in February 2010 of a camp in Indonesia's Aceh province that was allegedly training agents for terrorist attacks on Western targets in Jakarta.

Bashir has been through two previous terrorism trials, over the 2002 bombings in Bali that killed more than 200 people and the 2003 JW Marriott bomb attack in Jakarta that left a dozen dead.

The courts found him guilty of relatively minor charges in the Bali case. He was released in June 2006 after serving 25 months in jail.

The tiny village of Grand Marais in Michigan's Upper Peninsula can thank Janie Dowe for its upset win in a Reader's Digest contest, the Detroit Free Press reports.

Dowe sent out 700 e-mails a day since October to rally votes for her town in the "We Hear You, America" contest, which paid a $40,000 grand prize.

The town will use the money for engineering and survey work for a proposed breakwater to save its harbor from erosion caused by Lake Superior's pounding surf, Township Supervisor Jack Hubbard told the Free Press.

"It was a roller coaster," she told the paper.

The head of United Space Alliance's Florida operations is trying to talk NASA into letting his company fly the space shuttles as a commercial operation after NASA's shuttle program ends this year.

"We thought this was a good option to be put on the table to be evaluated with all the other commercial options, since it's a vehicle that has really proven itself," said Nappi, according to an article on Space.com. "It is safe. We have a lot of history, we understand how to operate it."

The company could start flying Endeavour and Atlantis twice a year beginning in 2013, Nappi said.

Still, the article says, he's telling his employees that the possible shuttle deal is "very much a long shot."

USA is asking NASA to fund a six-month study of the proposal's feasibility.

All 30 NATO world leaders practice social distancing as they pose for a photo and begin their summit in Brussels. Fâ€twitter.com/i/web/status/1â€¦rr
cnni

7:54 am ET June 14, 2021 RETWEET
Travel blogger and tour guide Valentina Miozzo moved to Kongsfjord, in the far north of Norway and within the Arctiâ€twitter.com/i/web/status/1â€¦Fq
cnni

7:00 am ET June 14, 2021 RETWEET
The US government has spent the past week assessing a report of a leak at a Chinese nuclear power plant, after a Frâ€twitter.com/i/web/status/1â€¦ow
cnni

6:37 am ET June 14, 2021 RETWEET
The parents of former US Marine Trevor Reed, who has been detained in Russia for almost 2 years, are urging US Presâ€twitter.com/i/web/status/1â€¦67
cnni