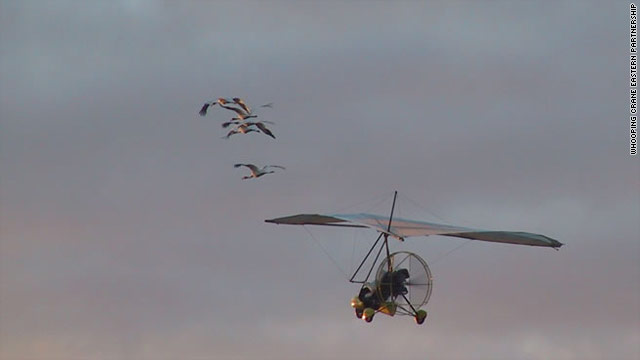 Another endangered whooping crane has been found shot to death, the U.S. Fish and Wildlife Service reports.

The agency is offering a $6,000 reward for information leading to a conviction in the death of a crane at Weiss Lake, Alabama, in late January.

The male whooping crane, designated 12-04, was equipped with a transmitter and leg bands to help track its movements. Raised in Wisconsin at Necedah National Wildlife Refuge, whooping crane 12-04 learned how to migrate behind ultralight aircraft flown by Operation Migration.

"We are extremely disappointed by the killing of this whooping crane," Jim Gale, special agent in charge of law enforcement in the service's Southeast Region, said in a press release. "We recently lost three whooping cranes to gunfire in south Georgia, now this one in Alabama. This senseless killing has just got to stop."

Officials are offering $20,800 in rewards for information on the crane deaths in Georgia, which occurred in late December.

A German couple has set the world record for the most decorated Christmas trees in one place. Months of preparationâ€twitter.com/i/web/status/1â€¦5D
cnni

5:27 pm ET December 8, 2021 RETWEET
Of all the things I thought I would need to watch out for in Chicago â€¦.A bison is not one@StephanieElamam needs totwitter.com/i/web/status/1â€¦wsIm
sarasidnerCNN

5:07 pm ET December 8, 2021 RETWEET
The entire world remains unprepared for the next pandemic and most countries are underprepared even for small outbrâ€twitter.com/i/web/status/1â€¦OS
cnni