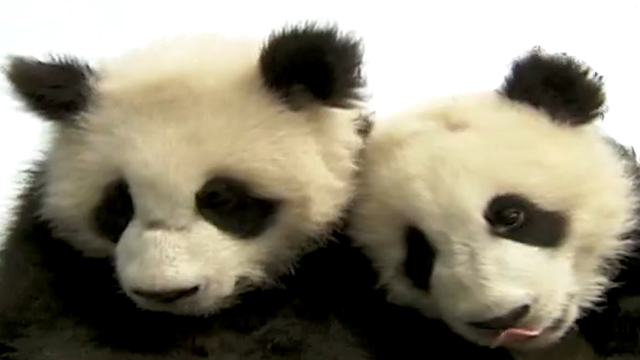 The Chengdu Panda Base in China's Sichuan Province has more than 60 endangered pandas.
February 10th, 2011
11:15 AM ET

Panda nursery school – What's cuter than babies? Did you say pandas? Well, what's cuter than pandas? Baby pandas! In China, seven baby pandas are at a special school where they will learn how to nurse from a bottle. Coaxing the babies to use a bottle is trickier than you might think, especially when hundreds of tourists are watching their every move.

Man vs. machine – On Valentine's Day, IBM's "Watson" computer will make its television debut as a contestant on "Jeopardy!" when it will take on flesh and blood champions Ken Jennings and Brad Rutter. It's a true showdown between man and machine, but it's not the first. On the same week 15 years ago, chessmaster Garry Kasparov threw down with another IBM creation, the super computer "Deep Blue." Here's a look back at their six-game battle.

Choosing to live – CNN's Paula Hancocks takes us to South Korea, where people considering suicide go to a course in which they write their suicide note and simulate their own burial, all with the hope that they ultimately decide not end their lives.