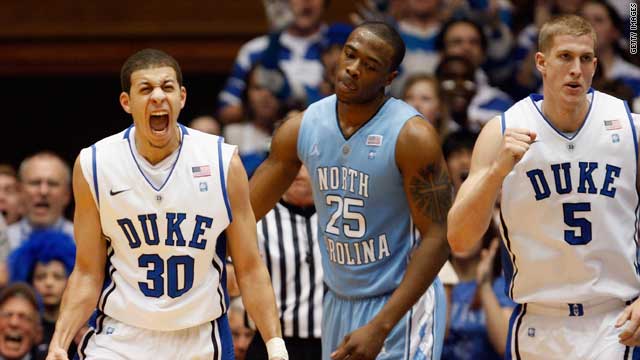 Down 14 points, the Blue Devils charged back in the second half, led by 34 points from senior Nolan Smith and a career-high 22 points courtesy of sophomore Seth Curry. As SI.com's Stew Mandel writes, Duke completely transitioned their sloppy first half into proof of why they hold the top spot in the ACC.

"After a halftime speech in which coach Mike Krzyzewski urged them to "settle down," Duke came out in the second half like an entirely different team," Mandel writes. "Twice in the first 2:40, Kyle Singler grabbed offensive rebounds off missed second free throws and kicked them out to the perimeter. Three-pointers by Smith and Curry made for a pair of four-point possessions. Duke just kept pounding the glass and grabbed nine offensive rebounds in the second half. The Blue Devils scored 10 points off turnovers after notching none in the first."

That is not to say, of course, that the Tar Heels stood idly by as the Blue Devils made their move. UNC's freshmen standouts Kendall Marshall and Harrison Barnes lit up the court with not only their defensive know-how and skillful offensive. Just one week after point guard Larry Drew abruptly left the team, the Heels held their own and forced their archrivals to step up their own game. Mandel explains:

"The Blue Devils didn't look so tough in the first half. With the help of North Carolina's upstart freshman point guard, Kendall Marshall, putting the ball in all the right places, Tar Heel big men Tyler Zeller and John Henson made mincemeat of Duke defenders Mason and Miles Plumlee and Ryan Kelly. In building a 43-29 halftime lead, UNC outrebounded Duke 27-18 and outscored the Devils 28-12 in the paint.

'We had to really face the facts and get real and know that we had to turn it around in the second half or we were going to get embarrassed out there,' said Curry."

Up tonight:
Los Angeles Lakers vs. Boston Celtics (8:00 p.m., ET) Ray Allen will get another shot at breaking the three-point record tonight when the Celtics take on rival Los Angeles.

UConn Huskies vs. St. John's (7:00 p.m., ET) Can St. John's pull off another remarkable upset tonight when they take on the Huskies at Madison Square Garden?

By The Numbers
26 - The blood letting continues as the Cavs notch their 26-straight loss - an NBA record.
$3.95 million - Amount of right-hander Shaun Marcum's one-year contract with the Milwaukee Brewers.
12 - Number of races driver Danica Patrick will compete in during the 2011 Nationwide Series.

Tropical Storm Ian is forecast to reach up to Category 4 hurricane strength before hitting Florida next weekâ€twitter.com/i/web/status/1â€¦F8
cnni

7:30 pm ET September 24, 2022 RETWEET
Iranian Americans are staging demonstrations across the US this weekend in solidarity with ongoing protests in Iranâ€twitter.com/i/web/status/1â€¦DE
cnni

Tropical Storm Ian is forecast to reach up to Category 4 hurricane strength before hitting Florida next weekâ€twitter.com/i/web/status/1â€¦F8
cnni

7:30 pm ET September 24, 2022 RETWEET
Iranian Americans are staging demonstrations across the US this weekend in solidarity with ongoing protests in Iranâ€twitter.com/i/web/status/1â€¦DE
cnni