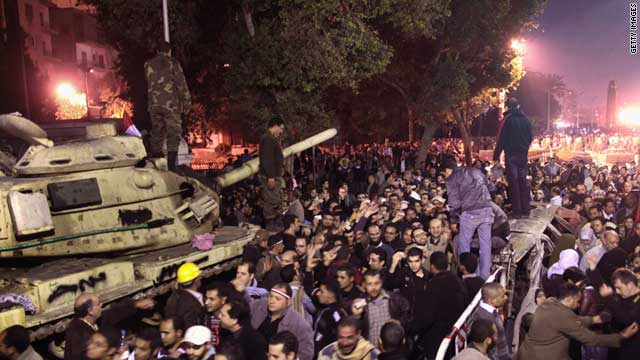 Mubarak's speech enrages protesters: Egyptian President Hosni Mubarak clung to his office but said he would "delegate powers" to Vice President Omar Suleiman according to the constitution - a major concession from the man who has ruled Egypt with an iron grip for 30 years. His speech, however, enraged protesters in Tahrir Square, who want Mubarak to leave now.

5 dead after homes leveled in Pennsylvania blast: The death toll in a suspected natural gas explosion that destroyed eight homes in Allentown, Pennsylvania, rose to five Thursday evening, authorities said. The victims include a 4-month-old and a 79-year-old.

Few customers line up for Verizon's iPhone: After years of anticipation, relatively few people waited in line Thursday morning to buy the new Verizon Wireless iPhone 4, according to anecdotal reports.

Man claims to be father of South Carolina baby left in toilet: A man who claims he is the father of a baby found in a South Carolina toilet said he doubts the explanations about why the recently arrested mother left the newborn in a commode.

House member resigns over 'profound mistakes': Republican Rep. Christopher Lee of New York resigned his House seat Wednesday after a report that the married congressman had tried to meet a woman on Craigslist.