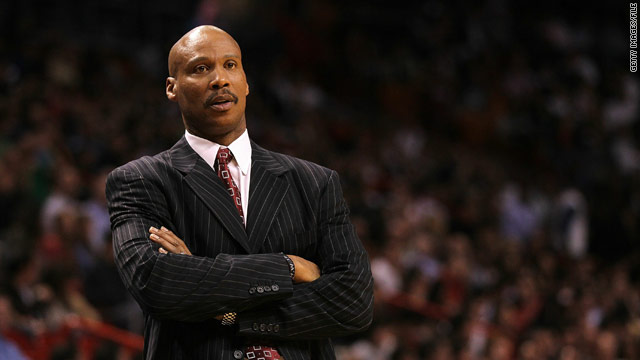 The coach of the Cleveland Cavaliers is respected around the NBA, even though his team has become the definition of losing.

The Cavs extended their NBA-record losing streak to 26 games Wednesday night with a 103-94 loss to the Detroit Pistons. They joined the 1976-77 Tampa Bay Buccaneers football team for the longest losing streak in professional sports history.

"That was probably the worst effort that we've had in a month," an obviously angry Scott said after the game in a video on NBA.com. "It's as simple as that. People didn't come ready to play, for whatever reason. Bottom line."

Scott said he ripped into his players at halftime and again after the game, when he kept the locker room closed to outsiders for 30 minutes, according to The Plain Dealer newspaper in Cleveland.

The only other thing he can do as a coach is to keep nonperforming players on the bench, he said.

"You've got to challenge their pride," he said. "We've got all professional basketball players in there," he said, nodding toward the locker room. "And at some point in time, you've got to have some pride in what you're doing."

Scott played guard in the NBA for 13 seasons, most of them with successful Los Angeles Lakers teams. Before this season, his first with the "Cadavaliers," he had a 353-355 record as a coach with the New Jersey Nets and New Orleans Hornets, according to basketball-reference.com.

"I can deal with losing, especially when our guys play as hard as they've played the last couple of weeks," Scott said Wednesday night. "But I find it very hard to deal with when guys come out not ready to play."

Schwartz, the Air Force chief of staff, told a roomful of defense contractor executives not to "blow smoke" in making promises about what proposed military systems might deliver.

"There's no time for it. There's no patience for it. OK?" he said Wednesday, according to an account in The Hill.

"If industry makes a commitment, you will have to deliver," Schwartz said. "There will be less tolerance ... for not delivering."

In an era of shrinking budgets, the days of free spending on experimental systems that have little promise of becoming practical, he told his silent audience, the paper reported.

"Cost control will be an issue in everything we do," Schwartz said.

"Gen. Schwartz is not a harsh person, so the tough talk clearly is aimed at sending a message," Loren Thompson of the Lexington Institute told The Hill. "The message is that the easy times are over for contractors, and companies that don't perform will be punished."

The Most Rev. John M. D'Arcy

The bishop emeritus of the Catholic diocese covering northern Indiana let his parishioners know Wednesday that he is being treated for prostate cancer.

"I'm doing OK. It's a little something new in my life," said D'Arcy, 78, according to the Fort Wayne Journal Gazette.

D'Arcy, who led the diocese for 36 years before taking emeritus status last year, will undergo radiation treatments five days a week for 40 days, he said.

"It reminds one of the 40 days of Lent," he quipped to the Journal Gazette.

D'Arcy said he solicits prayers not just for his health but also for more men to become priests. He also said he wants to encourage other cancer patients.

"I've had a lot of nice response from people who have had cancer or relatives have had it," he told the paper. "You know, all your life as a priest you're dealing with cancer patients and assisting them, and now I've joined them."