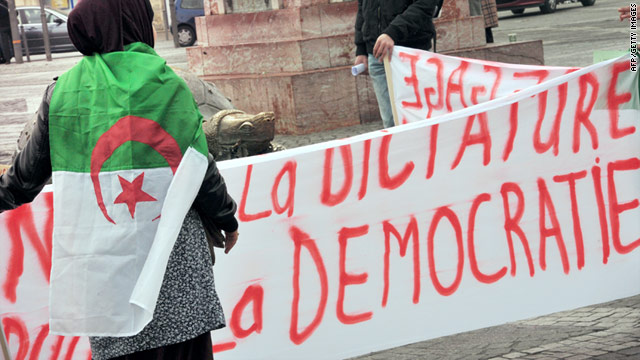 A woman waves an Algerian flag at a demonstration on February 12 in southwestern France.
February 12th, 2011
05:43 PM ET

Tensions erupted in another restive North African nation as security forces in Algeria on Saturday clashed with anti-government protesters who chanted, "Change the power."

Police detained about 100 protesters in the nation's capital of Algiers, according to the Algerian League for Human Rights. The league is one of the main opposition groups that organized the rallies - unauthorized gatherings that came a day after embattled Egyptian President Hosni Mubarak stepped down.

"We are here once again to tell this government that we want an Algeria (that is) democratic," one protester told Reuters television. "That's why we are here today and we will always be, as this power is still here, we will be always here too."

More than 3,000 demonstrators, including activists, students, doctors, and parliament members, joined the rally but were blocked by more than 30,000 police officers, said league president Mustafa Boushashi.

Bird, the startup that pioneered shared electric scooters, plans to go public as soon as this summer. It will mergâ€twitter.com/i/web/status/1â€¦ER
cnni

8:31 pm ET May 12, 2021 RETWEET
Howard University has announced that alunma Phylicia Rashad has been appointed dean of the recently reestablished Câ€twitter.com/i/web/status/1â€¦H4
cnni

8:01 pm ET May 12, 2021 RETWEET
One of Cuba's most rebellious dissidents has spent more than ten days in a closely guarded hospital in Havana but iâ€twitter.com/i/web/status/1â€¦ce
cnni