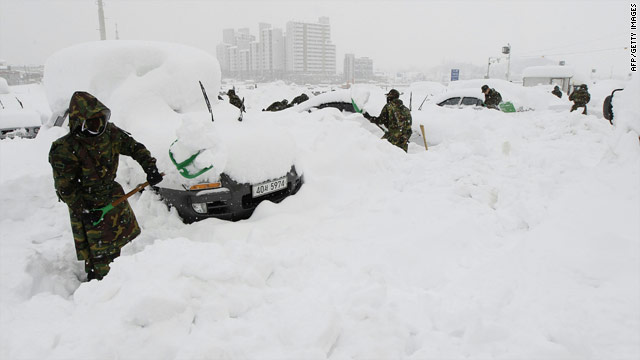 South Korean soldiers were digging out cars and searching for trapped residents Monday as areas along its eastern coast tried to recover from the biggest snowfall in 100 years.

More than 39 inches (1 meter) of snow blanketed the area over the weekend, according to the Yonhap news agency. The city of Gangneung got more than 30 inches (77.7 centimeters) on Friday alone, Yonhap said, the most ever recorded since record-keeping began in 1911.

And more is likely to come. More than 19 inches (50 centimeters) was forecast to fall Monday, the Chosun Ilbo newspaper reported.

More than 300 people were trapped in their homes in isolated mountain areas, The Korea Herald reported. Authorities had dispatched 22,000 workers and 1,750 snowplows to the area to clear the snow, it said.