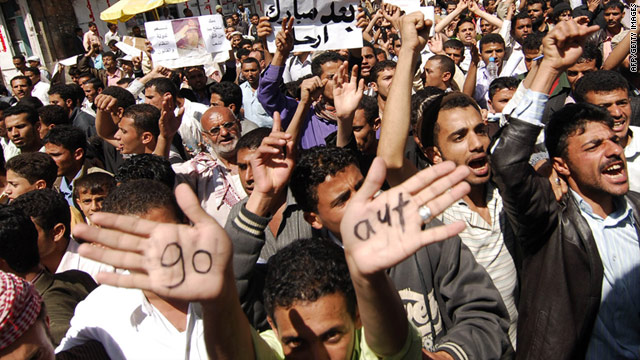 Anti-government protesters turn out Sunday in Sanaa, Yemen, as reverberations from Egypt and Tunisia continue in the region.
February 14th, 2011
10:52 AM ET

On the Radar: Protests in Yemen, Iran, Bahrain and painful cuts in Obama budget

Bahrain and Yemen protests -  The unrest spreading through North Africa and the Middle East has reached the Persian Gulf nation of Bahrain, the headquarters of the U.S. Navy's Fifth Fleet. At least three police officers and one demonstrator were injured in clashes Sunday, Bahrain's state new agency reports. Police fired on protesters with rubber bullets, causing one injury, the news agency said.

Further protests were scheduled to take place Monday in Bahrain. Protesters have organized on Facebook, Twitter and through e-mails, saying they want political changes, including a constitutional monarchy.

And in Yemen, battles between anti-government demonstrators and authorities continue into their fourth day. CNN's Mohammed Jamjoom reports from Sanaa. Are you in the region? Show us what's happening by sharing stories and photos with CNN iReport.

Iranian protests - Iranian authorities clashed with protesters who hit the streets of Tehran on Monday chanting, "Death to the dictator,"  a reference to President Mahmoud Ahmadinejad's regime. Security forces in uniform and plainclothed members of the pro-government Basij militia rushed toward crowds at Imam Hossein Square, the planned starting point of a scheduled rally, a witness said. Several people were hit, while the majority were chased away, the witness said.

Fights between security forces and protesters erupted at Tehran University when authorities fired tear gas and paint-ball guns at demonstrators, another witness told CNN. Some protesters have been detained.

Thousands marched peacefully along Revolution Avenue, some shouting their support for opposition leader Mir Hossein Moussavi. Who is Moussavi?

Meanwhile, in Egypt on Monday, the military appealed to citizens to stop protesting and return to work, saying that will help restore safety and security to the country.

Federal budget unveiled - There are some severe cuts in a proposed federal budget plan that President Obama is presenting to Congress on Monday morning. White House Budget Director Jacob Lew says the plan's cuts are tough, and include several government programs, including low-income heating assistance. The proposal doesn't touch Medicare, Medicaid and Social Security. The plan's overall goal is to slash $1 trillion over the next 10 years.

Obama's 2012 budget is sure to stoke the debate over how to get the government's fiscal house in order. Republican lawmakers are demanding even deeper cuts. Many Democrats and liberal advocates are expected to criticize the White House for cutting programs.

Mock space mission - Six cosmonauts are due to land Monday on Mars, sort of. They're 520 days into a mock mission to the red planet, a test of what would happen on a real flight to Mars.