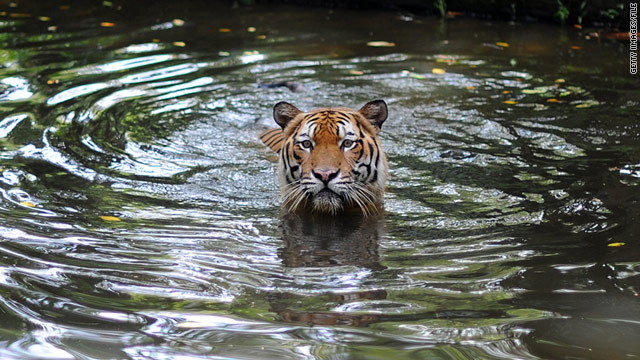 A villager in Malaysia has his wife to thank after she charged a tiger that had pounced on him in the forest, according to the Malaysia Star.

Tambun Gediu, who is in his 60s, was hunting for squirrels Saturday morning when he heard some rustling in the leaves, he told the Star.

He said the tiger was upon him so fast he didn't have time to react, according to the paper.

“My first instinct was to climb a tree but the tiger pounced and started clawing me,” he told the Star. “I had to use all my force to push the tiger’s mouth away from my face while shouting for help.”

Han Besou, 55, who was several feet away, heard the screams of her husband and charged the tiger with a large soup spoon, bopping it on the head, the paper reported. The animal fled.

The attack happened in the Gerik Belum Forest Reserve, where the aboriginal Orang Asli people reside. The attack was unprecedented in the village, the Star reported.

The villager, who suffered wounds to his knees, head and neck, was in stable condition Sunday after being transferred to Hospital Raja Permaisur Bainun, state Wildlife and National Parks Department director Shabrina Mohd Shariff told the Star.

Wildlife officials were awaiting a permit Monday to chase the tiger farther into the jungle, the director told The Star.