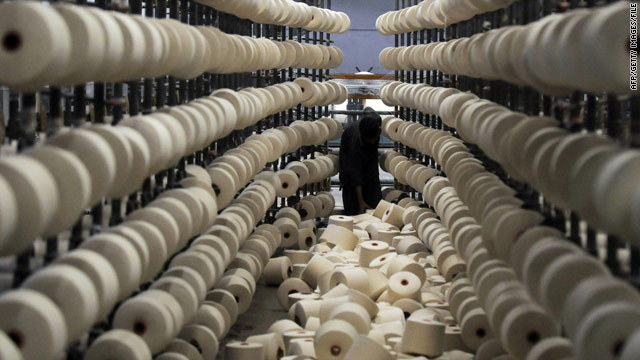 A worker arranges spools of thread at a textile factory in Karachi, Pakistan. Cotton prices have doubled in the past year.
February 15th, 2011
11:42 AM ET

From candy to cashmere, prices rising

Manufacturers of everything from cereal to refrigerators say they have absorbed price increases as long as possible and will now start passing along those costs to consumers.

Who's to blame? It depends. A cold snap in Mexico means potential shortages and higher prices for cucumbers and tomatoes. The Chinese economy is growing strongly, and it is gobbling up everything from oil to grains to metals.

Bad weather for cotton growing in Pakistan, China and Australia is fueling a historic rally in cotton. Cotton prices have doubled over the past year and will certainly translate into higher prices for T-shirts and underwear.

Hanes, Nike, and Polo Ralph Lauren are just some of the brands whose prices will rise, because of price increases for cotton, wool and cashmere.

Starbucks and McDonald's also have told investors on their earnings calls they will be raising prices this year. McDonald's said it will raise prices on coffee and food items "where it makes sense."

A one-month export ban on cocoa from Ivory Coast last month did not affect Valentine's Day, but candy maker Mars on its website says, "We continue to have concerns regarding the political situation that exists within Cote d'Ivoire."

Big-ticket purchases are affected, too. Appliance makers LG and Whirlpool have said they are charging more because of higher metals prices.

Soaring grain prices mean meat and dairy costs are rising. Â Some blame so-called "hot" money in commodities, fueled by the Federal Reserve's epic effort to pump money into the system to help the U.S. economy.

"All commodities to varying degrees are stores of value and in general are priced in U.S. dollars,"Â says economist John Ryding of RDQ Economics. "When the Fed keeps interest rates at effectively zero and prints $600 billion through QE2 (a second round of quantitative easing), investors, traders and speculators are likely to purchase other stores of value, and this is the essential process behind the general rise in commodity prices."

Hot commodities are only part of the story.

Still, it's a delicate task to raise prices when consumers are still so price-sensitive. Some of these price increases will be overt - more for T-shirts, underwear and shoes. Others will be less glaring - you may see prices for processed food stay the same, but there may be fewer manufacturer coupons.

Economist Ryding says there is no doubt that these prices will translate into higher consumer inflation.

But official forecasts for inflation are still pretty tame. The U.S. Department of Agriculture officially forecasts that food prices in the U.S. will rise 2% to 3% this year.

A giant robot resembling the 1970s anime figure Gundam has been tested in Yokohama, Japan. The robot stands at neâ€twitter.com/i/web/status/1â€¦vy
cnni

7:54 am ET October 1, 2020 RETWEET
An ambulance service in the UK's Lake District has tested a new jet suit that could help "save lives."â€twitter.com/i/web/status/1â€¦nj
cnni

7:52 am ET October 1, 2020 RETWEET
"On this darkest of days, we will grieve, we will cry our eyes out. But we will hug and love each other harder andâ€twitter.com/i/web/status/1â€¦Ij
cnni

7:39 am ET October 1, 2020 RETWEET
The world's first jet suit-wearing paramedic could be coming to the hilly terrain of the Lake District in the Uniteâ€twitter.com/i/web/status/1â€¦RV
cnni