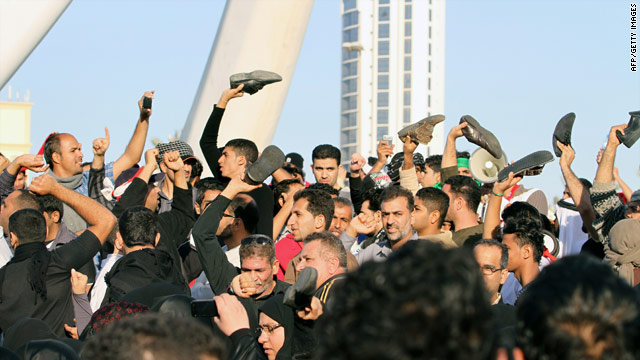 Anti-government protesters in Bahrain gather in the capital city of Manama on Wednesday afetr the deaths of two protesters in clashes with police.
February 16th, 2011
01:19 PM ET

Kristof: Bahrain regime has 'backed off'

Thousands of people had gathered Wednesday for a peaceful funeral procession for a Bahraini man killed when clashes erupted during another protester's funeral procession, the president of a human rights group said. Bahrain's Interior Ministry said those involved in the deaths of two people during recent protests are in custody.

Initially, protesters in Bahrain talked about wanting more democracy and to have political prisoners released, Kristof told T.J. Homes. Increasingly, protesters are calling for the overthrow of the ruling family and the conversion of Bahrain into a constitutional monarchy in which the king would reign, but not rule, Kristof said.

“They were really outraged at the government's brutality toward the peaceful protests earlier in the week. And at those two deaths,” he says.

There is some uncertainty about where protests will go later today, Kristof said.

“Now that the regime has backed off, it's a little hard to say where things will go,” he said. "It is possible that similar concessions will win the day. And that there will be some kind of a truce and agreement to have more democracy, some more concessions. And then people will go home. It's just very hard to predict.”