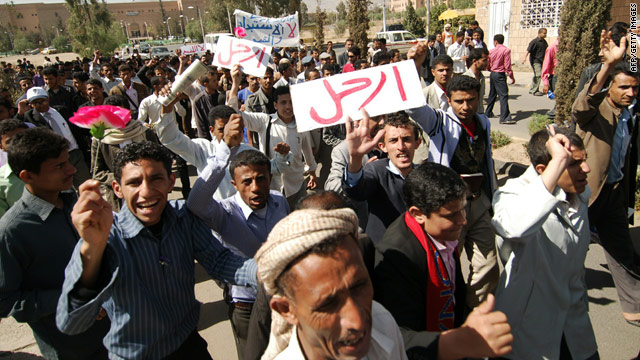 Middle East protests - Demonstrations against governments in the Middle East continue to rage, inspired by the weeks-long, anti-government protests in Egypt that forced President Hosni Mubarak to step down. In Bahrain, anti-government protesters rallied peacefully at the funeral of a man killed while protesting on Monday. Protests were far more violent in Iraq where demonstrators gathered outside the governor's office in Kut, about 60 miles south of Baghdad. One person was shot and killed when private security guards and Iraqi security forces opened fire. Twenty-eight people were wounded.

Wednesday marks the sixth day of anti-government protests in Yemen. Sanaa University students took to the street initially demanding improved curriculum, but their rally became an anti-government protest. Pro-government demonstrators showed up and began throwing rocks, two witnesses told CNN. There were no reports of injuries at the rally.

Planes grounded - United Airlines grounded its entire fleet of 757s for "unscheduled maintenance." There was a computer problem. Some flights are delayed or canceled. United said it hopes to resume normal scheduling later Wednesday.

Florida teens in court -Â Three Florida teenagers accused of setting another boy on fire in late 2009 are scheduled to be in court Wednesday. It could be the first time the suspects' side of the story is heard. The three teens - Denver Jarvis and Mathew Bent,Â both now 16, and Jesus Mendez, now 17 - have been charged as adults with second-degree attempted murder. The teens are accused of pouring alcohol on the victim, who is now 16, and setting him on fire after a dispute about buying a video game.

6:08 pm ET March 27, 2020 RETWEET
â€œBlood from people who have recovered can be a rich source of antibodies, proteins made by the immune system to atttwitter.com/i/web/status/1â€¦6Tig
susancandiotti