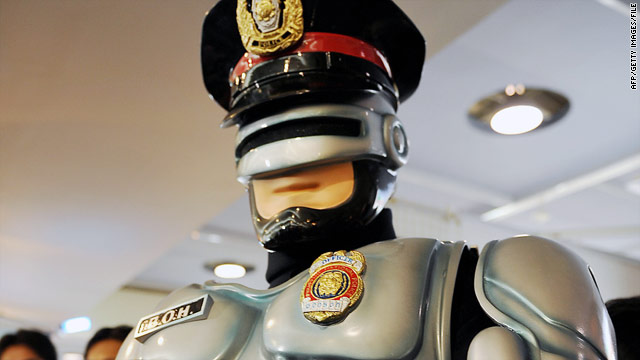 RoboCop to return to Detroit

Thanks to "crowd funding," it looks as if Detroit will get its RoboCop statue after all.

A week after Mayor Dave Bing took to Twitter to dismiss the idea, an independent online campaign has raised more than $50,000 to build a monument to the 1987 sci-fi movie hero, the Detroit Free Press reports.

Detroit artist Jeffrey Paffendorf, who is helping lead the effort, told the paper the group will continue raising funds online until March 29 to make the sculpture "as big and good as possible."

"RoboCop," starring Peter Weller, was about a mortally wounded police officer who comes back as an unstoppable crime-fighting machine in a grim, lawless Detroit of the future.

In an unscientific poll by CNN affiliate WDIV-TV, 310 (70%) of 440 respondents said they wanted a statue.

The plan is for a team of artists to create and erect the sculpture at Imagination Station, a nonprofit institution devoted to public art, near the ornate but abandoned Michigan Central Station rail terminal.

Bing responded to a Twitter question last week by writing, "There are no plans to erect a statue to Robocop. Thank you for the suggestion."

According to Imagination Station, a movie fan in Boston replied: "Philadelphia has a statue of Rocky & Robocop would kick Rocky's butt. He's a GREAT ambassador for Detroit."