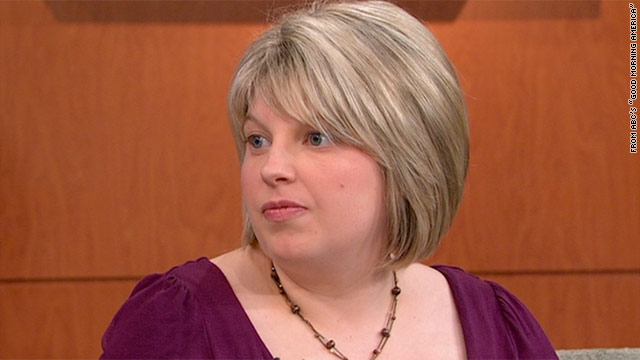 A Pennsylvania English teacher who called her high school students "rude, lazy, disengaged whiners" on her personal blog is standing by her comments after being suspended from her position over the controversy.

"I'm sorry it was taken out of context but I stand by what I said," Natalie Munroe told ABC's "Good Morning America" Wednesday.

The 30-year-old expecting mother said she wrote the posts on natalieshandbasket under the name Natalie M. with the intention that only friends would read the blog. The posts are no longer available on the blog but searchable in a cached version of the site.

"I was writing it not about anyone specific. They were caricatures of students that I've had over the years, things that I would say if we weren't limited in the canned comments that we're allowed to write. And again, it was partially meant tongue in cheek for me and my friends."

In several posts between August 2009 and November 2010, Munroe vented her frustrations - and shared a few positive experiences - with students she found to be "out of control" and lacking "honor and good moral character."

She has been suspended with pay, and her lawyer said she is waiting to see how the school will proceed before deciding whether to take legal action.

"It was not meant for everybody to see but if it's going to get out there, maybe it'll start a conversation that needs to be had," Munroe told ABC.

And boy, did it ever. The subject has topped Google trends and Twitter for the past two days, sparking heated discussions online and in real life over whether Munroe was out of line.

"Her comments about her students may or may not be on point. But as an educator, isn't*** her JOB to get through to these problem students and put them on the right educational track?" said one commenter on PhillyBurbs.com, the hometown newspaper of Bucks County, where Munroe teaches.

"To me, it seems as if Ms. Munroe is more preoccupied with complaining about her students than she is educating them. Her 'canned comments' look like something an eighth-grader would come up with. It's not helpful to anyone, and just illustrates how ineffective she must be as a teacher."

The controversy has also generated discussion on the timeless topic of what's up with kids today, anyway?

"She is 100% correct. There is no way she should lose her job," a Huffington Post commenter said. "When will we start holding parents accountabl­e? Perhaps if we make it a crime - a form of child abuse - to send a child to school unprepared, perhaps parents will become more engaged. If parents are fined for their child's behavior, maybe it'll knock some sense into both parents and child. I've taught in public schools and let me tell you it is hell for the teacher and any kid that really wants to learn," a Huffington Post commenter wrote.

As the controversy grew over the weekend, Munroe wrote a post titled, "Where are we going & why are we in this handbasket," lamenting that the public had latched "onto pieces of what I wrote without A. knowing any back story, and B. knowing the whole story."

She also noted that of 84 blog posts, 60 of them had nothing to do with school and work.

"Contrary to what seems to be popular belief, I didn't - and don't - feel negatively toward all students. As I mentioned in another blog that nobody chooses to talk about, there were delightful students in school, too. I fondly discussed some wonderful students who shined in the school's Jazz and Poetry Festival, and I even said that I was proud to be part of the school at events like that," she wrote.

"But the fact remains that every year, more and more, students are coming in less willing to work, to think, to cooperate. These are the students I was complaining about in my blog. The same way millions of Americans go home at the end of the day and complain about select co-workers or clients or other jerks they had to deal with, I came home and complained on my blog about those I had to deal with."