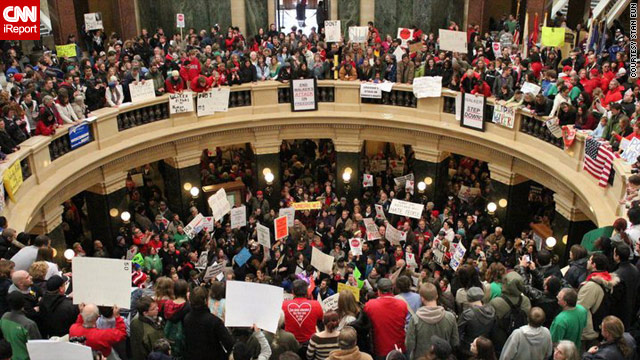 Sixteen Wisconsin state senators - 14 of them Democrats - did not appear at the capitol on Thursday for a scheduled vote on a bill that would strip some public employees of most of their collective bargaining rights and increase their contributions for benefits, according to Senate Majority Leader Jeff Fitzgerald and Wisconsin Democratic Party spokesperson Graeme Zielinski.

The bill cleared the Joint Finance Committee Wednesday night on a 12-4 vote and was intended to move onto the state Senate Thursday for a vote, but the absence of so many senators left that vote schedule in question.

It is not clear where the absent lawmakers are.

One of the missing legislators, Senate Minority Leader Mark Miller, declined to say whether the missing group left the state, but said "we are located away from the state capitol in a secure place."

"This was being fast-tracked. And we said, 'This is too fast.' Citizens won't stand for it. We're going to make sure that this bill has an opportunity for people to understand what's in it," Miller said.

About 10,000 people rallied against the proposal at the capitol on Wednesday, and many teachers protesting the bill called in sick on Thursday.