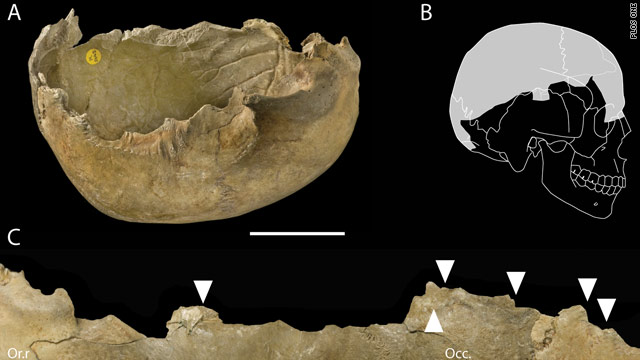 A human skull shows evidence of cut marks, indicating it was manipulated for use as a cup, scientists say.
February 17th, 2011
07:48 AM ET

Britons' fondness for a spot of tea is legendary. What isn't so well known is that their ancestors sipped their drinks from human skulls.

Scientists working at a site in Somerset, England, have found the first evidence of cannibalism in the British Isles, including the use of skulls for drinking cups, according to a study published Thursday by the Public Library of Science.

They also found evidence - tool marks and prying damage - that human bodies were methodically butchered 14,000 years ago and bone marrow was removed for eating. The bodies' craniums were carefully separated from the jaw and facial bones and the edges were smoothed out for usefulness and comfort, they wrote.

"This shows us the complexity of human behavior in ancient Britain. ... They treated their dead in many different ways," Stringer told The Australian. "It seems gruesome to us, but there are people in Asia today who aren't even meat eaters, who treasure human skulls and use them as drinking bowls."

Confidence is growing that a winter storm with the intensity of a hurricane, snow measured in feet and blizzard-likâ€twitter.com/i/web/status/1â€¦78
CNNweather

12:17 pm ET January 26, 2022 RETWEET
The Beijing Games will be the first Winter Olympics to use virtually 100% artificial snow by deploying more than 10â€twitter.com/i/web/status/1â€¦Ex
CNNweather

7:59 am ET January 26, 2022 RETWEET
The eruption this month of an underwater volcano near Tonga was hundreds of times more powerful than the Hiroshimaâ€twitter.com/i/web/status/1â€¦RL
CNNweather

2:13 am ET January 26, 2022 RETWEET
This astronaut has seen the impact of climate change on the Earth from space -- and hopes his research on board theâ€twitter.com/i/web/status/1â€¦RL
CNNweather