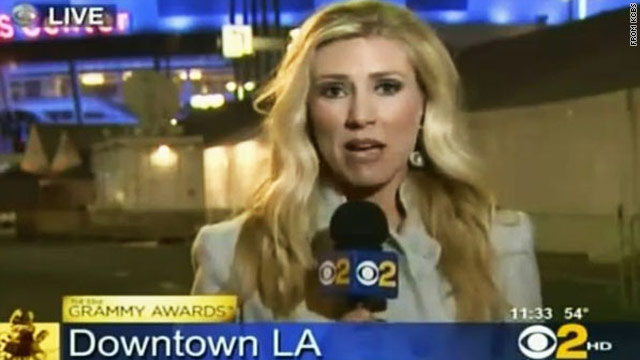 Doctor: Grammy reporter suffered migraine, is 'back to normal'

A migraine - not a stroke - caused a Los Angeles television reporter to mangle her words during a live post-Grammy Awards report on Sunday night, according to the UCLA doctors who examined her in the days after the incident.

KCBS reporter Serene Branson (pictured) suffered a migraine with aura - meaning neurological symptoms that in this case included language problems - causing her to speak gibberish during her report, according to Dr. Andrew Charles, migraine expert and UCLA professor of neurology.

"She’s completely back to normal," Charles said in a telephone interview Thursday, adding that he cleared Branson to return to all activities with no limitation.

Branson's report outside the Staples Center, widely viewed on YouTube early this week before the video was taken down, sparked concerns that she had suffered a stroke.

"A very, very heavy burtation tonight," she said before continuing with incomprehensible words.

Her station said paramedics examined her at the scene but she was not hospitalized, and a colleague gave her a ride home.

Branson was seen early in the week by the chief of neurosurgery at the Ronald Reagan UCLA Medical Center, Dr. Neil Martin, and then Thursday morning by Charles, UCLA spokesman Mark Wheeler said.

A scan ruled out a stroke, eventually leading Martin and Charles to diagnose a migraine, which can present symptoms similar to a stroke, Charles said.

Branson's migraine included a headache and three types of aura - the language troubles plus distorted vision and numbness, Charles said.

Charles said about 20 to 30 percent of migraine patients experience some type of aura, and those who do most commonly experience visual aura – flashing, wavy lines, or blurry vision.

Such a migraine "can be triggered by different life events, like any migraine – changes in patterns of sleep or diet or exercise or caffeine," Charles said.

Charles stressed that anyone experiencing the symptoms that Branson did should get checked immediately. "The symptoms can be indistinguishable (from that of a stroke) initially, so it's important to emphasize the need to rule that out first," he said.

Branson is expected to address the incident in an interview on KCBS Thursday night.