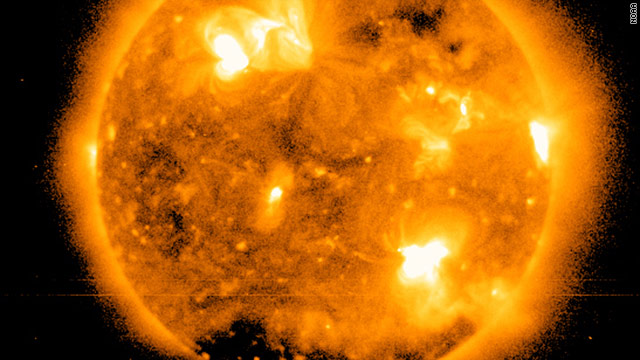 Sun set for solar blast, but NOAA is ready

It sounds like a Michael Bay movie - explosions on the sun affecting power grids, airlines, satellites.

But it's real, and the National Oceanic and Atmospheric Administration says it's about to happen, but it's highly unlikely to cause harm.

Tiny eruptions on the sun called solar flares (a more detailed description here from the BBC) have been happening for a few days, according to the NOAA. The activity signals that the sun, which is relatively quiet, is waking up, doing what one might call more vigorous stretching than it has done in about four years.

The flares could result in a dazzling show of Northern Lights. However, more serious consequences are described in a NOAA release. The flares "can blast Earth with magnetic events that can damage the electrical grid and temporarily damage radio and satellite telecommunications."

"We want people to know this is not, like, the mother of all events," said Joseph Kunches, a space scientist at the Space Weather Prediction Center in Boulder, Colorado. "What it means for the airlines is that they will adjust their routes, they know this is happening. Power grid operators have back-up plans, and they know what's happening."

NOAA has been in close communication with all aspects of industry that could be affected, he said.