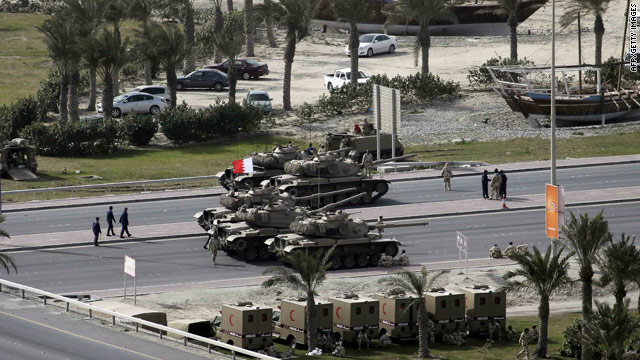 Security forces in Bahrain's capital, Manama, stormed an encampment of protesters in the dead of night before dawn Thursday, witnesses said, and the kingdom's health minister reported at least three people were killed and more than 200 others injured.

Bahrain is the headquarters of the U.S. Navy's Fifth Fleet, and the United States designated Bahrain as a major non-NATO ally in October 2001. Bahrain served as a base for U.S. military operations in the first Gulf War, and the U.S. is guaranteed the right to pre-position materials in Bahrain for use in future crises.

The administration is grappling with exactly what to say in response to the crackdown, the officials said. Top officials are "very concerned" about the violence but don't want to say anything that could lead to further violence, the sources said.

"Each country is different in how they respond to the expression of the legitimate aspirations of their people," he said. "It is very important and they need to do it in a way that reflects what we believe, what the president has said, are these universal values that each government needs to respect. And those are freedom of expression, freedom of the press, freedom of movement, freedom of assembly, freedom of access to information - the internet in particular - and to respond to those demonstrations in a nonviolent way. ...

"We call on both sides in countries where these demonstrations are taking place to be nonviolent and for the governments to be responsive."