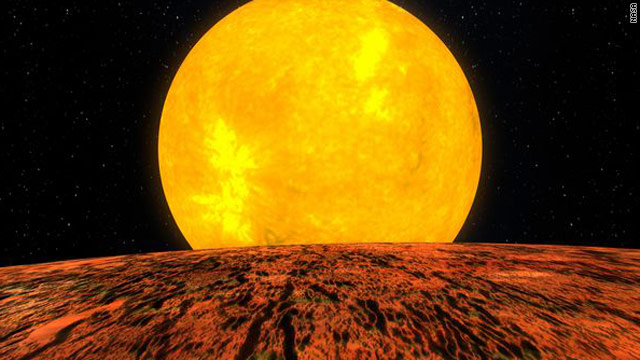 Where might extraterrestrials live? The first step is figuring out what other planets out there have conditions like our own.

Scientists using NASA's Kepler space telescope are working hard to find candidates for inhabitable planets. So far, it seems that for approximately every two stars in the galaxy, there is one possible planet, NASA's William Borucki said Saturday at the American Association for the Advancement of Science annual meeting in Washington.

Researchers have found some 1,200 candidate-planets and, of them, about 54 are earth-size candidate planets in habitable zones - in other words, perhaps at a distance from their stars that may be suitable for life. Earlier this month officials at NASA announced the discovery of five probable planets about the size of Earth, as well as six larger than our planet that are orbiting a single star. But bear in mind that Venus is also considered an "Earth-sized planet," and clearly no lifeforms live there (as far as we know).

Scientists on the Kepler mission revealed Saturday that you're probably going to have to wait until at least 2012 to find out anything substantial about the habitability of what appear to be Earth-sized planets. That's because scientists need to be able to see three transits of a planet around a star in three years before they'd be willing to say too much about them, and the project has only been going since 2009 (after all, our planet goes around the sun three times in three years).

And even then, Kepler wasn't designed to look at individual planets. But it might identify some that the James Webb Space Telescope, which will launch in 2014, can probe in further detail, looking at atmospheres and such. And note that the probability of having found our own particular planet using Kepler technology is only 12%.

And we won't be traveling to meet our potential new neighbors anytime soon. The stars about the size our sun that Kepler has been looking at are about 1,000 to 3,000 light years away, where one light year is about 6 trillion miles.

But there have been some fascinating surprises from the Kepler mission. One of them is that there appear to be a remarkable number of planets about the size of Neptune, which has a diameter four times that of Earth, said Sara Seager, physicist at Massachusetts Institute of Technology.

The planet Kepler-10b, shown in the photo above, is a particularly interesting find because it likely has no atmosphere, but does have liquid oceans that are essentially lava lakes, she said.

The existence of many small planets in the galaxy that Kepler has found also amazed scientists, because there was a possibility that they would have been destroyed by larger planets long ago.

"It was a wonderful surprise to see this large number of small planets we have found," Borucki said.

Lebanon's water supply system is on the verge of total collapse, according to the United Nations Children's Fund cnn.it/3hYjELT
cnni

1:44 pm ET July 23, 2021 RETWEET
The French power company that co-owns a nuclear plant in China would shut it down if it could, due to damage to theâ€twitter.com/i/web/status/1â€¦9T
cnni

1:28 pm ET July 23, 2021 RETWEET
Could the climate crisis mean the end of meat? Join CNNâ€™s Bill Weir on a journey to see how innovation could bringtwitter.com/i/web/status/1â€¦xb9h
CNNweather