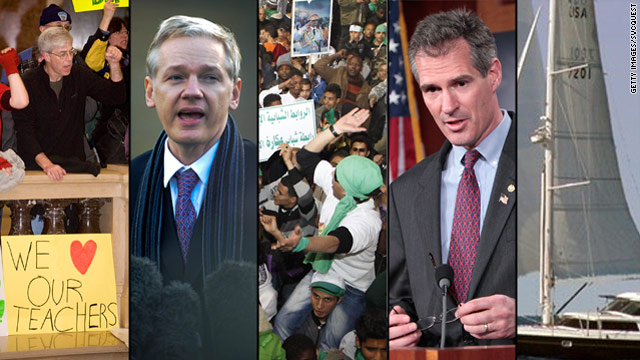 After weeks of anti-government protests in parts of North Africa and the Middle East - including revolts that prompted the ouster of longtime rulers in Tunisia and Egypt - unrest continues in several nations. Pressure on Libya's leader, in particular, seemed to be increasing fast on Sunday. Some roots of the unrest vary by country, though many demonstrators are protesting against issues including unemployment and corruption. Here's a look at this and some of the other stories we plan to follow this week:

Libyan army told to restore security "at any price"

Unrest in Libya appears to be entering a critical phase this week, with the son of longtime Libyan leader Moammar Gadhafi promising widespread reforms - including increased salaries and a relaxed criminal code - in a televised address early Monday. But he also warned that Libya's army has been told to restore security "at any price," and that the country faces civil war if protesters go on.

Multiple eyewitnesses said late Sunday that Benghazi, Libya's second-largest city, is now in the hands of protesters and their military allies, some after dropping allegiances to Gadhafi. CNN cannot independently confirm these reports, because the Libyan government maintains tight control on communications and has not responded to repeated requests from CNN for access to the country.

But Gadhafi's son, Saif al-Islam Gadhafi, acknowledged in Monday morning's televised address that a "great sedition" was under way in Benghazi. Eyewitnesses in Libya have reported protests in other cities, indicating that demonstrations centered in the east were spreading west. The U.S. State Department said Sunday it has received "multiple credible reports that hundreds of people have been killed and injured" in the Libyan unrest. The latest round of demonstrations against Gadhafi - who has ruled Libya for 42 years - began last week, part of the wave of protest that has swept Arab nations since January's revolt in neighboring Tunisia.

This week may offer a look at how people in other Arab countries are responding to their rulers' moves to assuage discontent. In Yemen, where hundreds of anti-government protesters gathered Sunday in the capital for a 10th consecutive day, President Ali Abdullah Saleh is saying he hopes a new conference of civil organizations will come up with recommendations to alleviate the country's instability. Saleh - a key U.S. ally in the fight against an offshoot of al Qaeda in Yemen - also has said he will not seek another term in 2013, and said he would postpone parliamentary elections scheduled for April to allow more time for discussions about reform.

In Bahrain, where thousands of people recently retook a major square in the heart of the capital, seven opposition groups were meeting to consider their next steps after an appeal from Crown Prince Salman bin Hamad al Khakifa for a national dialogue. The groups are coming up with a list of demands, including an independent investigation into the deaths of protesters. Last week's protests there left 10 dead and many injured.

In Jordan, King Abdullah II on Sunday told his new government to enact "real and quick reform" amid growing protests around the Middle East, promising to root out corruption and give lawmakers a bigger role in government. Like other countries in the region, Jordan's economy has been hit hard by a global economic downturn, and youth unemployment is high. Last week, clashes between pro- and anti-government demonstrators who called for abolishing the peace treaty between Jordan and Israel left several people injured, witnesses said.

Also worth keeping an eye on will be Iran, where witnesses said thousands of security officers cracked down on landmark sites in Tehran and other major cities on Sunday, sometimes striking protesters with batons and rushing others on motorcycles. Iranian authorities began rounding up many government opponents last week amid calls for protests like those that have swept across other nations in the region.

A British judge is expected decide Thursday whether to order the extradition of WikiLeaks founder Julian Assange, who is in the United Kingdom and is wanted for questioning in Sweden on sexual misconduct allegations that he denies. Assange would be expected to appeal the order if it is given. Assange's website, WikiLeaks, has published tens of thousands of once-secret U.S. documents on subjects ranging from the war in Afghanistan to the inner workings of U.S. diplomacy. His lawyers have expressed concern that Sweden, if Assange is sent there, might hand him over to the United States.

Five African heads of state - sent by the African Union - are expected to arrive in the Ivory Coast on Monday to come up with a binding decision on a post-election crisis in which the incumbent president refuses to relinquish power. Incumbent President Laurent Gbagbo's supporters have clashed over the past few months with those of Alassane Ouattara, who foreign powers say defeated Gbagbo in a November election. More than 33,000 people have fled to neighboring Liberia since the crisis began, and 20,000 others have been internally displaced, the United Nations says.

The U.S. military is considering its options after Somali pirates hijacked a yacht with four Americans onboard in the Indian Ocean last week. The military is prepared to intervene if necessary, according to Rear Adm. Charles Gaouette, deputy commander of the U.S. Navy's Fifth Fleet. ﻿﻿Authorities said the yacht was en route from India to Oman when it was captured Friday. A U.S. official speaking on condition of anonymity said the United States is determining what military assets are in the region and the capabilities of the personnel onboard.

What will become of Wisconsin public worker protests?

Protesters in Wisconsin are entering a second week of a fight against a bill that would slash collective bargaining rights of the state's public employees. More than 100,000 people marched on the state Capitol last week, many of them teachers who called in sick, effectively shutting down classes in 15 school districts. The state Senate was going to vote on the bill last week, but 14 Democratic lawmakers fled the capital rather than allowing a quorum that would permit a vote.  The measure is part of the governor's effort to combat steep budget deficits.

Wisconsin isn't the only place where public workers are fighting such a measure. In Ohio, former Gov. Ted Strickland has called on Democratic supporters to join protests at the Ohio statehouse against a bill that would eliminate collective bargaining rights for state workers. The measure also would eliminate tenure as a consideration when deciding layoffs, require workers to pay at least 20 percent of their health insurance premiums, and institute merit-based pay for some public sector workers. Ohio is facing a budget deficit of $8 billion, according to the National Conference of State Legislatures.

Will Chicago mayor's race go to a runoff?

Chicago will hold its election for mayor on Tuesday, and apparent frontrunner Rahm Emanuel will be hoping to capture more than 50 percent of the vote to avoid a runoff in April. The winner will succeed longtime Mayor Richard M. Daley, who last year decided not to run for re-election. Polls indicate that Emanuel, former chief of staff to President Barack Obama, is the overwhelming favorite.

U.S. Sen. Scott Brown of Massachusetts, who told CBS's "60 Minutes" in an interview airing tonight that he suffered sexual and other abuse when he was a child, will release his new book this week. The abuse will be one topic addressed in the book, "Against All Odds: My Life of Hardship, Fast Breaks, and Second Chances." His book and book tour is considered an unofficial start to his bid for re-election next year.

Also coming out with a book this week is former Arkansas Gov. Mike Huckabee, who sought the GOP nomination for president in 2008. Huckabee is considering a 2012 bid, and a tour for his book, "A Simple Government," will take him to some of the states that vote early in the primary and caucus calendars.