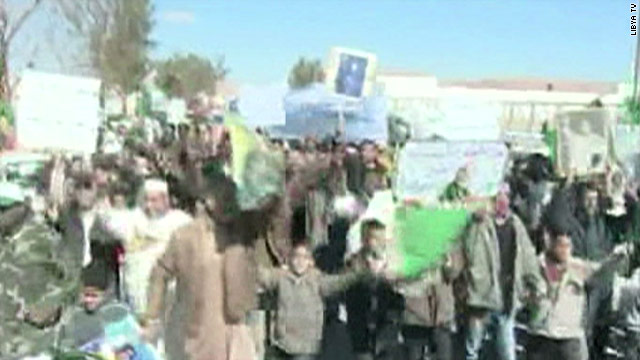 [Updated: 12:30 a.m. Tuesday, Libya; 7:30 a.m. Monday ET]: Britain is summoning the Libyan ambassador to London to the Foreign Office "to convey in the strongest terms our absolute condemnation of the use of lethal force against demonstrators," the British Foreign Office said in a statement Monday.

[Updated: 11:58 p.m. Monday, Libya; 6:58 a.m. Monday ET]: The Libyan ambassador to India has resigned in light of recent events in his country, a source in the Indian government said Monday.

[Updated: 9:59 p.m. Monday, Libya; 4:59 a.m. Monday ET]: BP is preparing to evacuate families and non-essential staff from Libya, according to the company's press office in London. BP said no operations have been impacted yet, but preparations for onshore drilling in Ghadames are being suspended.

[Updated: 9:51 p.m. Monday, Libya; 4:51 a.m. Monday ET]: Protesters in the Libyan capital of Tripoli have ransacked the headquarters of Libyan state television and set fire to at least one government building in the capital, according to multiple media reports quoting witnesses. CNN has not independently confirmed the information.

[Updated: 9:20 p.m. Monday, Libya; 4:20 a.m. Monday ET]: The European Union said the responsibility lies with member states to decide whether to evacuate their citizens from Libya, though the EU has the mechanism to support such evacuations.

[Updated: 8:01 p.m. Monday, Libya; 3:01 a.m. Monday ET]: The estimated death toll from four days of protests across Libya has reached at least 233, according to a statement Sunday from Human Rights Watch. The group cited information from hospital sources.