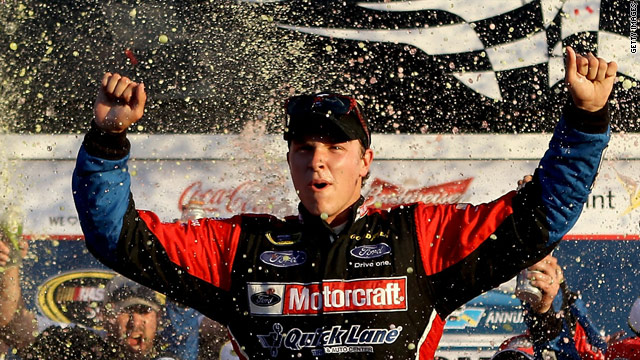 After he had just driven 500 mentally exhausting miles to win NASCAR’s most prestigious race, Trevor Bayne needed to ask for directions Sunday evening. He wasn’t sure how to get to Victory Lane. Well, he made it there eventually.

You see, 20-year-olds aren’t supposed to win the Daytona 500. The race is about working closely on the track with another driver, and rookies don’t have the history for other racers to be comfortable around them at 200 mph.

At least, that’s how it usually works. Driving a car with the number 21 - made famous by one of the greatest drivers ever, David Pearson - Bayne became the youngest winner of the race and only one of two drivers to win an event in his second Cup start.   ESPN’s Ed Hinton says it’s exactly what a struggling sport could hope for.

The revolution in Egypt was born through social media, and now a child born during the nation-changing event will bear the name of the most famous social media site in the world.

A young Egyptian man was so moved by the role of the internet in the victory in his country that he named his newborn daughter Facebook, according to TechCrunch. The website, translating an article from the Egyptian paper Al-Ahram, said Jamal Ibrahim from the Ibrahimya region chose the name to pay tribute to role the site played in spreading news inside the nation and to the rest of the world, beginning last June.

The newborn, whose full name is Facebook Jamal Ibrahim, received many gifts from young Egyptians overjoyed to hear her name, the paper reported.

It’s Oscar week! James Franco is both a co-host and a nominee. But the 32-year-old actor might not have agreed to join with Anne Hathaway to serve as masters of ceremony had it not been for comedic actor Seth Rogen.

As the Los Angeles Times explains, we can thank the stoner comedy “Pineapple Express,” in which Franco and Rogen co-starred.  Franco told the newspaper that he realized that he should no longer hide who he was after seeing how Rogen handled himself. Franco says he’s “less guarded, thanks to Seth” now.

The Yale student loves to stay busy as a movie star, author and artist. He told CNN’s Brooke Anderson that it's “weird” that he is the Oscars host and he just wants to see how they “make me over.”

The Academy Awards air Sunday night on ABC at 8 ET/5PT.