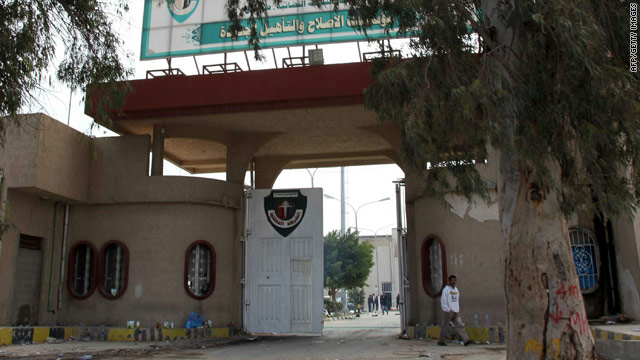 On the Radar: Defiance in Libya and Wisconsin, 53 killed in Juarez

Though observers wonder if Libyan protests could mean the end for leader Moammar Gadhafi's reign, his son has warned on state television that there could be "a fierce civil war" if demonstrations continue. Continue they did, as the central government lost control of the coastal city of Banghazi, and protests continued in Tripoli.

Though CNN has not yet been granted access to report on the ground, there were several reports of violence Monday. Protesters set a government building in Tripoli ablaze the day after ransacking the state TV headquarters, according to media accounts. In the capital, hundreds of pro-government protesters gathered to listen to a speaker in Green Square, an eyewitness said. Another group of protesters who tried to make their way to the square dispersed when confronted by security forces with tear gas.

Crowds topped 50,000 people this weekend as demonstrators continue to express their frustration with the state's budget bill. Gov. Scott Walker, however, is not retreating. The bill is vital and complaints that it is union-busting are a "red herring," he said.

Tom Morello, formerly Rage Against the Machine's guitarist, has called Walker "the Mubarak of the Midwest," likening the governor to the recently toppled Egyptian leader. Morello will perform solo for protesters Monday. The budget repair bill was proposed by Walker to address a $137 million shortfall through June 30. It increases state workers' contributions to their pensions and health insurance benefits, requires collective bargaining units to conduct annual votes to maintain certification and eliminates the right of unions to have dues deducted from worker paychecks. Fourteen Democratic state senators essentially boycotted the Legislature and went to Illinois to prevent a quorum from passing the bill. Walker has said powerful public employee unions are behind the blocking of the bill.

It was one of the bloodiest 72 hours in recent memory, authorities said after 53 people, including four policeman, were killed in Ciudad Juarez, Mexico. It began Thursday when 14 people were killed. Twenty more were killed Friday - a state police investigator en route home, among them. Saturday brought 19 killings, including a patrolman killed by a driver whom he'd just given a citation. He was shot 10 times in broad daylight. The violence was not exclusive to Ciudad Juarez, either. Mexico's Public Security Secretariat reported that 13 taxi drivers were killed in Acapulco in a rash of violence that began Friday.

Suspected drug traffickers are believed to be behind the violence in addition to setting cars ablaze and destroying street lights and security cameras. Among the casualties, a human head was discovered on a street and another body was found near a charred vehicle.