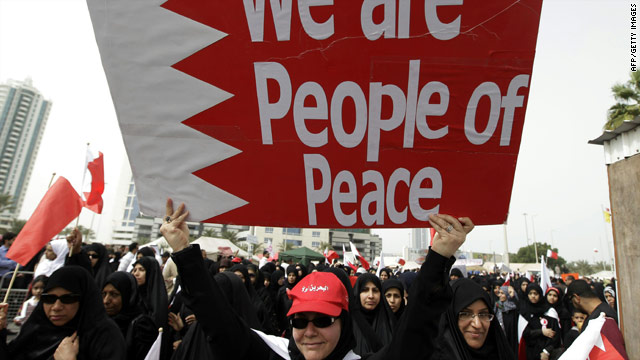 Tension and dark humor among protesters in Bahrain

Editor's note: CNN's Tim Lister reports the following from Bahrain, where thousands of protesters have been in the capital's Pearl Roundabout, preparing for a massive demonstration on Tuesday. Protesters took to the streets of the capital last week to demand reform and the introduction of a constitutional monarchy, but some are now calling for the removal of the royal family, which has led the Persian Gulf state since the 18th century.

I was down at the Pearl Roundabout on Monday - the epicenter of Bahrain's protest movement, where the demonstrators' encampment has taken on an air of permanence, with tents, makeshift kitchens, even a rudimentary field hospital.

And some dark humor. We bumped into one young man who wore a placard saying "Wake Me Up Before You Kill Me," a reference to the security forces' assault on the roundabout in the early hours of last Thursday. Nearby, a cartoonist had set up a "Democracy Wall" - Gulf style - with all sorts of sketches lampooning the royal family. Relatives of those injured or killed last week carry photographs of their loved ones. Above it all, a giant Bahraini flag hoisted by a crane.

Not to be outdone, thousands of government supporters rallied in another part of the city on Monday night - thankfully, a long way from Pearl Roundabout. While there has been no violence reported since Friday night, and the crown prince has committed himself to dialogue with opposition groups, there is still plenty of tension here.

Occasionally rumors sweep through the crowd at Pearl Roundabout - that pro-government marchers are headed that way, or that army units have left their base. All of them are unfounded, but they make for a sometimes edgy atmosphere. With the planned arrival from London onÂ Tuesday night of a leading opposition figure who is charged with trying to overthrow the government, the political see-saw in Bahrain continues to swing between negotiation and confrontation.

3:05 pm ET July 30, 2021 RETWEET
Monsoons rains this weekend could cause flash flooding across the West -- and possibly help relieve areas of severeâ€twitter.com/i/web/status/1â€¦ln
CNNweather