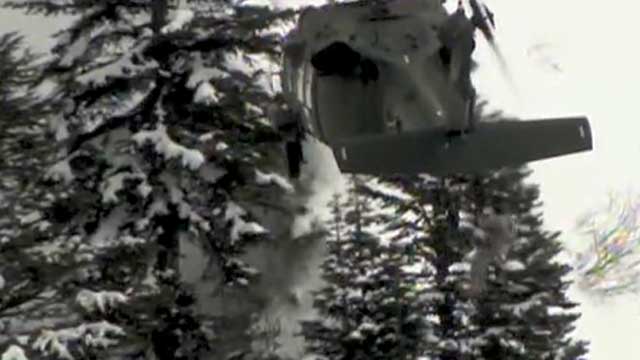 The National Guard rescues a wayward snowboarder from a helicopter.
February 22nd, 2011
11:28 AM ET

Wayward snowboarder – This video looks like it could be pulled right from a major Hollywood action flick. But it's an actual rescue by the National Guard of a snowboarder who lost his way. And as you might expect, this snowboarder has a pretty chill attitude about the whole ordeal.

Beneath the border – Elaborate does not even begin to describe the network of tunnels built¬Ýbetween the U.S. and¬ÝMexico. Our Rafael Romo takes us inside this maze used for smuggling people and drugs. Here, border agents have the grisly task of¬Ýfinding signs of human presence, which sometimes includes finding bodies of those who didn't make it across.

'Girl Talk'¬Ý– We're still not quite sure how Gregg Gillis went from bio engineering nerd to a music artist with a cult-like following. But we are sure that this looks like one heck of a show (whether you like his music or not).

Conan redux – If you missed Conan last night, here is your afternoon pick-me-up

At least 38 people were killed at pro-democracy protests in Myanmar on Wednesday, the UN's Special Envoy to the cou‚Ätwitter.com/i/web/status/1‚Ä¶ss
cnni

9:07 pm ET March 3, 2021 RETWEET
The people killed when an SUV was struck by a semitruck in California's Imperial Valley are believed to be among do‚Ätwitter.com/i/web/status/1‚Ä¶0t
cnni