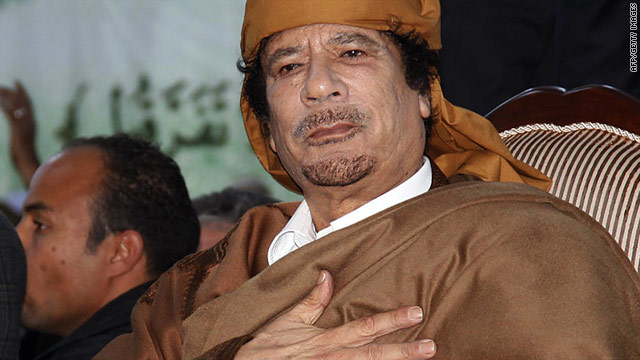 Protesters are demanding that the leader of Libya, Moammar Gadhafi, step down.
February 22nd, 2011
10:29 AM ET

Libya - Libyan leader Moammar Gadhafi may be losing control of the country. There appears to be no government control in eastern Libya. CNN's Ben Wedeman, who is reporting exclusively from inside Libya where other reporters have not been allowed, says the unrest is threatening oil supplies. Tripoli residents say they are running out of food and facing gunfire from Libyan security forces. Gadhafi went on TV to deny reports that he had fled the country, and state television has reported he will speak again. Who is Gadhafi, and who is his son, who also addressed the nation?

Other international protests - Across the Middle East and North Africa, dozens of protests in several countries continue to rage. Stay up to date with CNN.com's live blog from the region. In Bahrain, at least 30,000 protesters have marched through the center of Manama, the capital. It's the biggest anti-government rally since protests there began last week.

New Zealand earthquake - A 6.3-magnitude quake rocked Christchurch, New Zealand, one of the country's largest cities. The quake killed 65 people, but the death toll is expected to increase. Several people are trapped in the rubble of buildings that were flattened. Tour the devastation with CNN's Anna Coren, and listen to the mayor describe the earthquake.