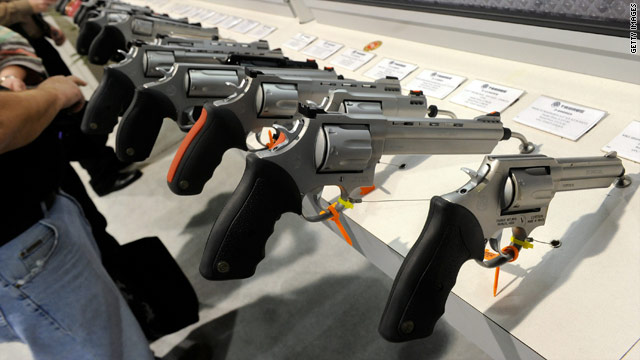 Before a vote on the measure, there will be a public meeting on carrying concealed guns on Texas college campuses.
February 22nd, 2011
03:21 PM ET

Texas lawmakers are weighing a bill that would allow professors and students to carry concealed weapons on college campuses. Before the voting begins, a public meeting on the measure will be announced soon on the legislature's site, searchable by #sb354.

"This is about self-defense," said San Antonio Republican Sen. Jeff Wentworth, the legislation's sponsor. "It's about protecting lives of students who are totally vulnerable and defenseless and able to be picked off by a deranged shooter, as was the case in Virginia."

Wentworth is referring to the April 2007 massacre at Virginia Tech when student Seung-Hui Cho shot 32 people to death. All except two were killed in classrooms in a single on-campus building. Cho committed suicide as authorities approached. He had purchased the handguns used in the massacre legally. (See CNN.com's special coverage of the Virginia Tech tragedy.)

Virginia Tech is the deadliest school shooting in U.S. history. The second-deadliest happened in 1966 when Charles Whitman killed 16 people and wounded 31 at the University of Texas at Austin. A student and former U.S. Marine, Whitman picked off some of his victims from his perch in a campus tower. Most recently in Texas, a student fired an assault rifle in September at the University of Texas. He killed himself, but no one else was hurt.

"The Virginia shooter was mentally deranged. The people who would be able to carry weapons on campus, if this passes, would be licensed, and therefore fully trained," he said. "To get a license in Texas, you have to be 21, go through a 10-hour course and pass an exam, and go out on a shooting range with a handgun and pass a test.

One would have to undergo a criminal background check and pay a fee of more than $100, Wentworth said. "People do not lightly apply for licenses," he said. "We would have responsible, trained people there in the classroom."

"I was there that day. It was the craziest day of my life with one person walking around with two guns," Colin Goddard told reporters last week when he spoke out against the bill at the Texas Capitol. "I can't even imagine what it would have been like with multiple students and multiple guns."

Goddard was shot four times and survived by playing dead. He wrote about his opposition to guns on campus for CNN.com in January.

Former Tech student John Woods, whose girlfriend was killed in the shooting, joined Goddard in Texas to say he, too, is against the bill.

Predjama is one of the most extraordinary castles in the world, built in the mouth of a cave complex at the end ofâ€twitter.com/i/web/status/1â€¦hy
cnni

1:01 am ET January 18, 2022 RETWEET
Sitting serenely in the warm azure waters of the Indian Ocean, the Maldives guarantees the whitest of white sand beâ€twitter.com/i/web/status/1â€¦fA
cnni