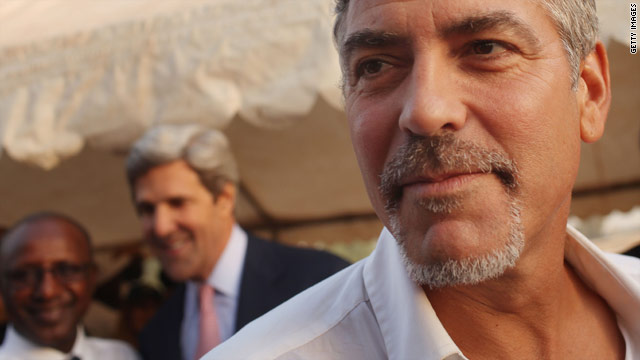 The Oscar-winning actor may be attending Sunday night's ceremonies, but a lead story in Newsweek this week is not about his next movie, but his work in the war-torn country of Sudan. Clooney, who was in Sudan a month ago, tells the magazine, which called him a 21st-century celebrity statesman: "Celebrity can help focus news media where they have abdicated their responsibility. We can't make policy, but we can 'encourage' politicians more than ever before."

The dean of Christchurch Cathedral in Christchurch, New Zealand, was in his office when the earthquake hit. The cathedral was heavily damaged, and Beck has called for unity, asking people to help each other out after the tragedy. Sixty-five people have died, and rescue operations are under way for the scores of people who are still trapped.

The mayor of Milwaukee, who ran in the governor's race last fall against now-Gov. Scott Walker, has accused the governor of creating "an ideological war." Barrett gave his "state of the city" speech at the Milwaukee Job Corps Center on Monday, and during the speech defended the Democratic senators who left the state to prevent a vote on Walker's drastic budget-cutting proposal that includes gutting collective bargaining rights for many public employees.

The program director of Toronto's 105.3 KISS FM has banned Carrie Underwood music from the station ... for life. Zarbatany did so because Underwood's hockey player husband Mike Fisher was traded from Ottawa to Nashville recently. Zarbatany called Underwood hockey's Yoko Ono.