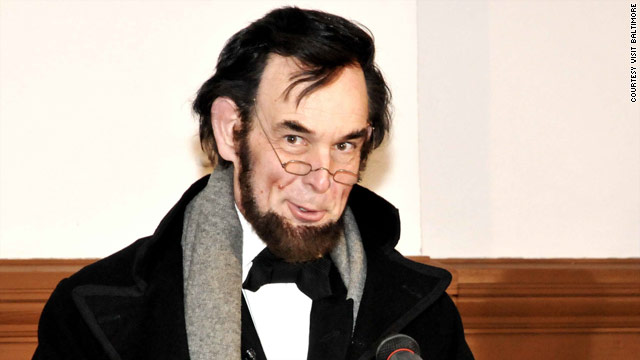 Folks in Baltimore, Maryland, could be forgiven for doing a few double-takes at the tall stranger who rode into town Wednesday morning.

A man who looked an awful lot like the guy on the $5 bill arrived by carriage at Camden Station in a re-enactment of a secret transit by President-elect Abraham Lincoln exactly 150 years earlier.

Following his election in November 1860, Lincoln was making his way to Washington for his March 1861 inauguration when he learned of a possible assassination plot.

Lincoln canceled a midday public arrival in the divided city of Baltimore on February 23, 1861, instead passing through in the wee hours of the morning, according to Sara Hisamoto, director of public relations for Visit Baltimore, the city's tourism bureau.

Actor Fritz Klein, as Lincoln, explained to media members why he had to change his plans.

"My life is truly at risk here this day," Klein said in a non-historical script. "For the sake of holding our great country together for the challenges ahead, I must offend the vast population of Baltimore today that have no knowledge of this plot, in order to return again another day."

Baltimore claims to have seen the first bloodshed in the run-up to the Civil War in the Pratt Street Riot, just a month after Lincoln's inauguration. In that riot, secessionists threw rocks and other objects at Union soldiers who were on their way to put down the rebellion at Fort Sumter, South Carolina. Troops opened fire on the crowd, killing 12.

Maryland would become a North-South battleground state in the war. With an estimated 23,000 casualties, the Battle of Antietam (also called the Battle of Sharpsburg) in September 1862 was the bloodiest battle of the four-year war.

Visit Baltimore has planned a series of events to commemorate the 150th anniversary of the war and the city's pivotal role in it.