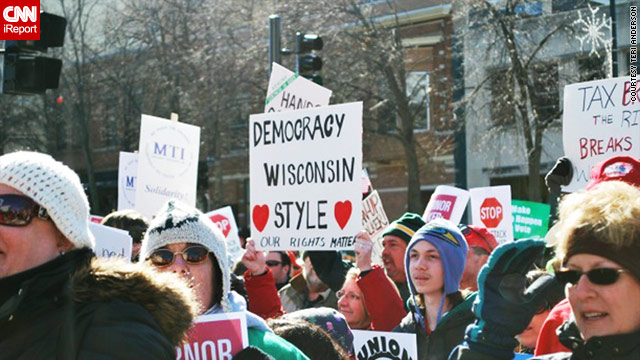 Tens of thousands of protesters are rallying in Wisconsin.
February 23rd, 2011
11:25 AM ET

Thousands of protesters are chanting, drumming, singing, locking arms and waging campaigns against bills that would affect union rights in Ohio, Wisconsin and Indiana. CNN's iReporters are there, capturing the demonstrations from within the crowds.

Wisconsin: Facebook, Twitter and e-mail are playing a huge role in student involvement in the massive protests outside the state Capitol building in Madison. Watch protesters chant, "Kill the bill!" Three student walkouts were reportedly sparked by Facebook invitations that were sent across the University of Wisconsin-Madison Facebook page. Thousands are now standing, shouting and chanting in the city Wednesday, voicing their opposition to what Republican Gov. Scott Wilson calls a "Budget Repair" bill that would force state workers to increase their contributions to their pensions and health insurance benefits. Wilson said the bill must pass to head off a $3.6 billion budget gap by 2013 - and layoffs.

University of Wisconsin students have protested alongside teachers. Health care workers have shown up to rally, and dozens of other state employees are literally beating drums to express their opposition to the bill that would eliminate collective bargaining rights. Even Rage Against the Machine's guitarist is there. He wrote about why he's joined the demonstrators for CNN.com. And CNN's Tom Foreman penned this note to President Barack Obama about the protests. All-but-declared presidential candidate Rick Santorum compared protesters to drug addicts.

Indiana: Democratic members of the state House walked out yesterday on a Republican-supported bill that would reduce private-sector union rights and prevent unions from requiring workers to pay dues. Labor unions shouted, "You're fired!" at Republicans on Tuesday, according to the Indianpolis Star-Tribune. The paper filed a Q & A about the bill. The battle in this state is all about politics at this point - a political standstill.

Ohio: For the second week, crowds of teachers gathered in Columbus, shouting and chanting "Kill the bill!" Ohio is facing an $8 billion budget shortfall, and Republican Gov. John Kasich says that it has to pass to restore "balance" to the budget. Demonstrators have been yelling, "Teachers, yes! Kasich, no!" The measure is not about destroying unions, Kasich has repeatedly said. The legislation would allow school administrators to be able to ignore tenure when considering whether to lay someone off. The bill would also mandate that workers pay at least 20 percent of their health insurance premiums. Merit-based pay - though it's unclear how merit would be measured - would be given to some public employees.

Dinosaurs, like us, got sick and injured. Until relatively recently, however, diagnosing multi-million-year-old diâ€twitter.com/i/web/status/1â€¦jC
cnni