Utah's governor orders all adults entering the state to disclose their travel plans in the latest state-led crackdoātwitter.com/i/web/status/1ā¦Yq

Roughly 20% of the NYPD's uniformed workforce is out sick, according to a law enforcement officialātwitter.com/i/web/status/1ā¦eT 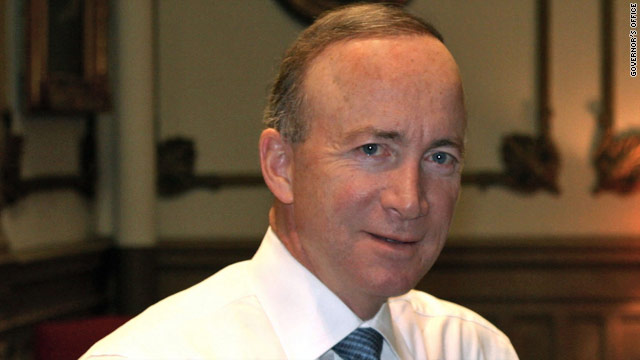 Although he does want to limit labor unions' influence, Indiana's Republican governor has not taken the hard line of his colleagues in Wisconsin, Ohio and Michigan.

Daniels has told GOP members in Indiana's General Assembly that they need not push a bill to ban forcing non-union workers to pay dues in union shops.

And when Indiana's Democratic senators, like their Wisconsin counterparts, fledĀ the stateĀ to avoid a vote on it, he didn't rip them in the media. He said the tactic was "a perfectly legitimate part of the process," according to the Indianapolis Star.

"Even the smallest minority has every right to express the strength of its views - and I salute those who did," he said.

For almost 28 years, the tax commissioner of Cherokee County, Georgia, loved his job - until his doctor told him it would kill him.

The 62-year-old resigned this month due to insomnia, acid reflux and crippling depression brought on by the stress of foreclosing on homes.

"I was foreclosing on the homes of people I have known my entire life," he told the Atlanta Journal-Constitution on Monday.

Fields oversaw the foreclosure of nearly 100,000 homes in 2010 alone in the foothills north of Atlanta.

"I would talk to somebody or deal with something, a foreclosure or a lien, and I would just have to step out of the office to regain my composure," he said.

Gamble is a firefighter with the Los Angeles County Fire Department Search and Rescue unit. He is among more than 70 Californians nowĀ in Christchurch, New Zealand, trying to save people trapped after this week's magnitude 6.3 earthquake.

The unit has extensive experience in rescue and recovery - Haiti, Hurricane Katrina and 9/11, to name a few instances.

"To be able to take this mission to an international country, that's something special," Gamble told CNN affiliate KTLA.

"If we have continued flu-like illness, then obviously, very expansive testing is going to be necessary," says CDCātwitter.com/i/web/status/1ā¦3d
cnni

8:48 pm ET April 9, 2020 RETWEET
Amazon says it has reassigned a group of employees to build a lab meant for coronavirus testing. It hopes to beginātwitter.com/i/web/status/1ā¦G3
cnni

8:37 pm ET April 9, 2020 RETWEET
US President Trump said that there have been more than two million coronavirus tests conducted in the United Statesātwitter.com/i/web/status/1ā¦tq
cnni

8:26 pm ET April 9, 2020 RETWEET
The Organization of the Petroleum Exporting Countries (OPEC) and Russia have reached a tentative agreement to cut oātwitter.com/i/web/status/1ā¦Nf
cnni