A crew member has died and another injured following the accidental discharge of a prop firearm by actor Alec Baldwā€twitter.com/i/web/status/1ā€¦G1

Queen Elizabeth II spent a night at the hospital for "preliminary investigations" and returned to Windsor Castle toā€twitter.com/i/web/status/1ā€¦ae

Trump ally Steve Bannon held in criminal contempt by House of Representatives for defying a subpoena from the commiā€twitter.com/i/web/status/1ā€¦rb

The leader of the Haitian gang who kidnapped 17 US and Canadian missionaries has threatened to kill the hostages ifā€twitter.com/i/web/status/1ā€¦Gw 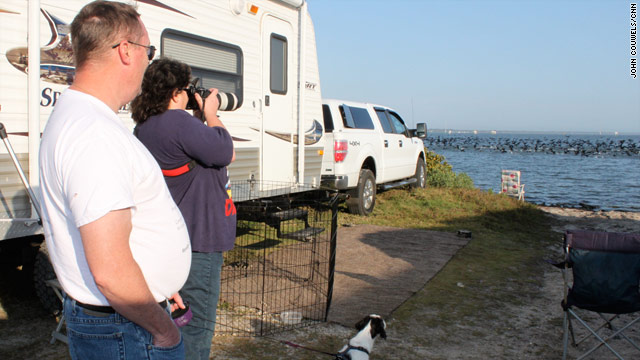 Ed and Debby Rogers of Utah are part of the tens of thousands of campers outside Kennedy Space Center to watch Thursday's shuttle launch.
February 24th, 2011
02:29 PM ET

NASA's shuttle Discovery is scheduled to launch Thursday for its final mission as the shuttle program comes to an end. After months of delays due to leaks and cracks in the external tank, NASA says Discovery is ready.

And so are the people who began lining up along the causeways and waterfronts across from the Kennedy Space Center earlier this week.

Ed and Debby Rogers drove all the way from Utah with their dog AJ and pet bird Bamby.Ā  They parked their RV along the Indian River for the second time in hopes Discovery will lift off and not be scrubbed like their first trip in November.

"For us it's a once in a lifetime experience," says Debby. "We grew up always watching it on TV and we always wanted to see in person."

Are you watching the shuttle launch?Ā  Tell us about it.

Parking lots, batches of grass on the side of the road and parks with a view of the Kennedy Space Center are filled with people hoping to witness a spectacular launch. More than 60,000 people are expected at the Kennedy Space Center said NASA to witness the launch and that doesn't include the tens of thousands of spectators along the Indian River.

Hundreds have been packing into Space View Park in Titusville, Florida, where memorials to previous space programs are displayed.

Mike and Carol Hashiro who both work for Boeing in Los Angeles planned their trip to Florida with their son Kyle Ā in hope of see the shuttle launch.

"What we both do at work eventually ends up in space," says Carol, as she sits on the water's edge in Space View Park. "It's really exciting to see it used out there."

This artist specializes in intricate doodles - and his canvases include walls, sneakers, and even cars.ā€twitter.com/i/web/status/1ā€¦oD
cnni

1:52 am ET October 22, 2021 RETWEET
Shares of Snap, which owns Snapchat, plunged as much as 25% in after-hours trading following the company's earningsā€twitter.com/i/web/status/1ā€¦TX
cnni

1:41 am ET October 22, 2021 RETWEET
Climate change is an "emerging threat to the financial stability of the United States," Stephen Ledbetter, the execā€twitter.com/i/web/status/1ā€¦wj
cnni

1:22 am ET October 22, 2021 RETWEET
Meghan, Duchess of Sussex, has written a letter to urge US Congressional Democratic leadership to pass federal paidā€twitter.com/i/web/status/1ā€¦6b
cnni