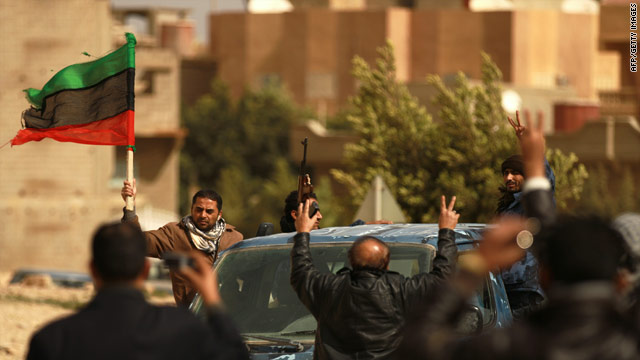 Across the Middle East and North Africa, CNN's reporters and iReporters are covering protests, many of them inspired by revolts in Tunisia and Egypt that toppled those countries' longtime rulers. Check out our story explaining the roots of the unrest in each country. Have a story to tell from the scene? Click here to send an iReport.

[LIBYA, 10:12 p.m. ET, 5:12 a.m. local] The following story from CNN's Ben Wedemen shows people in the eastern Libyan city of Benghazi, walking through what is left of a Gadhafi family palace, which was trashed by demonstrators:

[ALGERIA,¬Ý9 p.m. ET,¬Ý3 a.m. local] U.S. President Barack Obama has issued a statement commending Algeria for formally lifting a state of emergency that had been in place since 1992.

"This is a positive sign that the government of Algeria is listening to the concerns and responding to the aspirations of its people, and we look forward to additional steps by the government that enable the Algerian people to fully exercise their universal rights, including freedom of expression, association and assembly," Obama said in the statement, which was released by the White House.

Algeria's move lifts restrictions on freedom of speech and assembly. Those restrictions were imposed in 1992 to combat an Islamist insurgency. The decision to lift the restrictions comes as Algeria, like other Arab nations, faces waves of protest.

[LIBYA, 8:06 p.m. ET, 3:06 a.m. local] ÔªøDoctors at a field hospital in Martyrs Square in the northwestern Libyan city of Zawiya said Friday that 17 people were killed and another 150 were wounded when government forces attacked the city. They predicted the death toll would rise by morning.

Six pro-regime soldiers who were captured said they had been told that the city was being run by Arab militants and it was their job to liberate it, according to the doctors, who asked not to be identified. The soldiers added
that they had been misled so that they would fight against their countrymen, the doctors said.

By the end of the day, the situation was calm in the seaside city, they said.

[LIBYA, 6:54 p.m. ET, 1:54 a.m. local] U.S. President Barack Obama spoke Thursday with the leaders of France, Italy and the United Kingdom on coordinating an international response to the crisis in Libya, the White House said.

The statement said Thursday's discussions were to "coordinate our urgent efforts to respond to developments and ensure that there is appropriate accountability."

"The leaders discussed the range of options that both the United States and European countries are preparing to hold the Libyan government accountable for its actions, as well as planning for humanitarian assistance," the White House statement said.

The French statement on Obama's discussion with Sarkozy indicated possible U.S. movement toward a decision on specific steps.

[LIBYA, 5:05 p.m. ET, 12:05 a.m. local] Underscoring the growing distance between the Gadhafi regime and Libyan diplomats, the flag hanging outside the Libyan mission to the United Nations in New York on Thursday was the opposition flag; the regime's flag had been taken down.

[LIBYA, 3:41 p.m. ET, 10:41 p.m. local] In the first indication the crisis with Libya could take on a U.S. military dimension, the Pentagon is looking at "all options" it can offer President Barack Obama in dealing with the Libyan crisis, a senior U.S. military official told CNN on Thursday.

The official declined to be identified because of the extremely sensitive nature of the situation, but he has direct knowledge of the current military planning effort.

"Our job is to give options from the military side, and that is what we are thinking about now," the official said. "We will provide the president with options should he need them."

[LIBYA, 10:39 a.m. ET, 5:39 p.m. local] The Libyan ambassador to Jordan, Mohammed Hassan Al Barghathi, said during a press conference in Amman on Thursday that he is resigning on account of the current unrest in Libya. He also paid condolences to the families who have lost loved ones in the violence.

[LIBYA, 9:54 a.m. ET, 4:54 p.m. local] Libyan leader Moammar Gadhafi blamed unrest in his country on al Qaeda, saying the organization's leader, Osama bin Laden, is exploiting Libya's youth, which he said are told to attack after taking pills. "Our children have been manipulated by al Qaeda," he said. "Those exploiting the youth have to be arrested."

Bin Laden's followers are waging "jihad" on the Libyan town of Zawiya, Gadhafi said on state television Thursday. He appealed to mothers and fathers to go retrieve their children, arrest the al Qaeda conspirators and treat the children for the drugs they have been given.

He also mentioned the town of Zawiya, where at least seven people were killed in bloody clashes overnight. "We shouldn't leave Zawiya just like that without any control," Gadhafi said.

Gadhafi maintained that the Libyan people are in control of the country and denied that he has any power. "We have 3 million Libyans. They run the country," he said. "... I have only moral authority."

[LIBYA, 9:25 a.m. ET, 4:25 p.m. local] Those fomenting unrest in Libya have been "brainwashed by (Osama) bin Laden telling you what to do," longtime Libyan leader Moammar Gadhafi said on state television Thursday.

[LIBYA, 7:54 a.m. ET, 2:54 p.m. local] Groups of men supporting Moammar Gadhafi attacked anti-government protesters in the main square of the Libyan city of Zawiya, a witness told CNN. At least seven people were killed and 40 injured, the witness said. The clash is over and people are returning to the square, as well as going to hospitals to give blood, according to the witness. "I expect the city to go through the worst," the witness said.

Overnight in Tripoli, government security forces increased their grip on the Libyan capital, allowing no one in or out of the Ben Ashur neighborhood, sources tell CNN.

[YEMEN, 4:45 a.m. ET, 12:45 p.m. local] Eight lawmakers from GPC, Yemen's ruling party, have resigned. Two of them that CNN spoke to said they stepped down to protest the violence that anti-government protesters have faced in recent days.

One aircraft is in Malta; the other in an undisclosed location, he said. The ministry did not elaborate when the evacuations will take place.

[LIBYA, 2:05 a.m. ET, 9:05 a.m. local] The Libyan city of Misrata is now in the hands of the opposition,¬Ý witnesses and multiple media reports said Thursday. Misrata, also spelled as Misurata, is the third largest city after Tripoli and Benghazi.

Anti-government protesters have driven out mercenaries, according to the opposition.

A ferry chartered by the U.S. to evacuate citizens from Libya will stay in port in Tripoli overnight because of bad weather, diplomatic sources told CNN.¬Ý Citizens are safe on board and the ship is expected to leave at some point Thursday, sources said.

[LIBYA, 12:30 a.m. ET, 7:30 a.m. local] Al Qaeda's North African wing has said "it will do whatever we can to help" the uprising in Libya, according to a statement the militant group posted on jihadist websites.

The statement by Al Qaeda in the Islamic Maghreb was posted Thursday, said SITE, a terrorist-tracking organization based outside Washington.

Omicron was in Europe long before travel bans on southern Africa cnn.it/3FYnSfU
cnni

4:01 am ET December 2, 2021 RETWEET
A new species of armored dinosaur discovered in Chile had a type of weaponized tail not seen before in any other di‚Ätwitter.com/i/web/status/1‚Ä¶Ji
cnni

3:01 am ET December 2, 2021 RETWEET
Twitter has updated its privacy policy so that it can remove images of people that have been posted without their c‚Ätwitter.com/i/web/status/1‚Ä¶yN
cnni