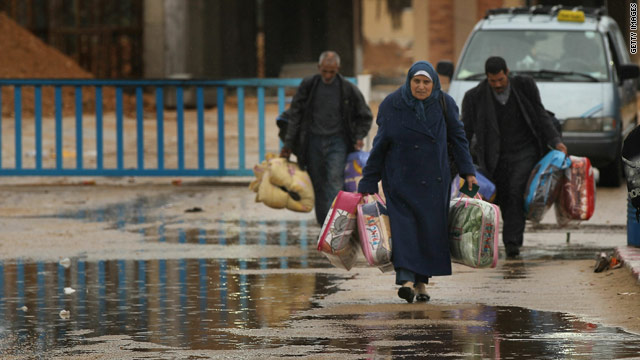 People fleeing from violence in Libya carry luggage to a Tunisian border post this week.
February 24th, 2011
10:49 AM ET

Turmoil in Libya - It's Day 10 of anti-government protests in Libya. There were bloody clashes Thursday between security forces and demonstrators in Zawiya, a town west of the capital, Tripoli. Seven people have died there, witnesses said. "Blood is all over the streets," a mother told CNN, saying her son had been shot. A witness said the violence began when people who support leader Moammar Gadhafi came into the city square and encountered those who are protesting his ouster.

Speaking by phone Thursday on state TV, Gadhafi blamed the country's violence on young people, who he said were taking drugs and being influenced by al Qaeda. Addressing the situation in Zawiya, he said, "We shouldn't leave (the town) without any control."

Gadhafi, who has ruled Libya for more than 40 years, gave no indication he is considering stepping down. The Pentagon is looking at military options to deal with the crisis in the oil-rich country. Meanwhile, oil prices are soaring, and there's fear al Qaeda could become a factor in the unrest.

U.S. citizens will have to wait until Friday to evacuate from Libya because bad weather is keeping a ferry from departing Tripoli. CNN iReports are flooding in from across North Africa and the Middle East, where protests have been happening since uprisings in Tunisia and Egypt toppled governments.

Assange, an Australian, has said the case in Sweden is part of a "dirty tricks" campaign to smear him after WikiLeaks published troves of classified U.S. diplomatic and war documents. WikiLeaks is suffering financially. If WikiLeaks doesn't survive, new sites - including one launched by hackers - could take over where WikiLeaks left off.

There's always a WikiLeaks angle to other news. The Daily Beast's Philip Shenon says U.S. cables that WikiLeaks released suggesting corruption in Libya may have led to the uprising there. Need a WikiLeaks review? Check here.

Once troubled automaker bounces back - The auto giant is reporting its first annual profit since 2004. The company on Thursday said it made $4.7 billion in 2010, mostly from a rebound in sales in the United States and strong growth in China. The U.S. and Canadian governments financed GM's bankruptcy.