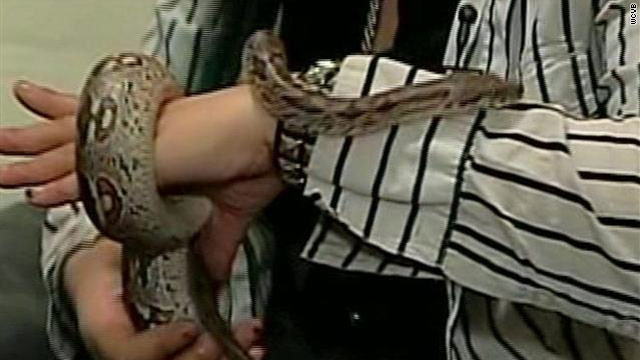 Snake on a train: The payback

When Melissa Moorhouse got on a Red Line subway train in Boston on January 7, her pet snake, Penelope, was coiled cozily under her scarf.

When Moorhouse got off the train, Penelope, a Dumeril's boa, stayed behind, hiding somewhere in the car, CNN affiliate WCVB-TV reported.

A month passed before another passenger reported seeing a snake on the "T," as the Metropolitan Boston Transit Authority system is called. After another search, Penelope was found, safe and sound, and returned to Moorhouse.

But that's not all the T folks had for Moorhouse. This week she received a $650 bill, she told the station.

"To rid the subway car of any traces of germs such as salmonella, which may have been left by your snake, MBTA maintenance crews had to scrub and disinfect the Red Line car in which your snake was found," MBTA Treasurer-Controller Wesley Wallace wrote to Moorhouse.

The MBTA told Moorhouse she should use a pet carrier if she carries the snake on a train again.

Pacific Gas & Electric (PG&E) must pay $125 million for its role in the 2019 Kincade Fire in Sonoma County, accordiâ€twitter.com/i/web/status/1â€¦LN
CNNweather

8:03 am ET December 4, 2021 RETWEET
As of Friday morning, only two states in the US have blizzard warnings -- and they are Alaska and Hawaii. In fact,â€twitter.com/i/web/status/1â€¦dX
CNNweather

11:41 am ET December 3, 2021 RETWEET
Drone video shows large parts of La Palma island covered in ash from the Cumbre Vieja volcano which has been eruptiâ€twitter.com/i/web/status/1â€¦rx
CNNweather