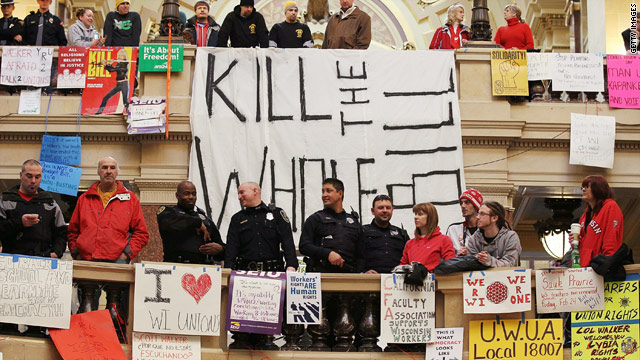 Protestors demonstrate in Wisconsin's capitol rotunda on Friday against a bill that would restrict collective bargaining for most government workers.
February 25th, 2011
08:49 PM ET

Lawmaker recommends 'all work, no play' strategy for Wis. senators who fled state

For all you Wisconsin senators in hiding, some advice from another lawmaker who's been there: Keep working and avoid the hotel bar.

At least that's the strategy Texas Rep. Pete Gallego and some 50 other Democratic representatives adopted in 2003, when they boarded a bus and fled to Ardmore, Oklahoma, to block a Republican-drawn redistricting plan that would cost them five seats in Congress.

The proposal, backed by former U.S. Rep. Tom DeLay, eventually passed, despite their efforts. But the stunt proved fruitful in other respects, Gallego says, as a bonding experience for the lawmakers and an opportunity for them to reassess their goals.

"A lot of us hadn't been on a bus trip since high school. We spent most of the time together, working and eating together, so a lot of members became close friends," says Gallego, who has represented Texas' District 74, the state's largest district, stretching nearly 39,000 square miles, since 1991.

The 14 Democratic senators from Wisconsin have fled to neighboring Illinois to prevent a quorum from voting on a bill that would strip most state workers of the bulk of their collective-bargaining rights.

But if their stay in Rockford, Illinois - a northern Illinois city which is attempting to capitalize on the lawmakers' presence with an "escape to Rockford"Â tourism campaign that uses Cheap Trick guitarist Rick Nielsen to lure visitors toÂ its "hideaway hotspots" at "runaway rates" - resembles the Texas lawmakers' experience in Oklahoma, the senators will spend most of their time in a hotel conference room rather than enjoying the city's microbreweries and farm-to-table fine dining.

"We knew we had to be prepared for the worst things people would say about us. If someone says you're not doing your job, we elected you to be our representative in Austin and you're not there, if you're going to put career at risk, you want to be to explain in detail why you did what we did, and we spent a lot of time just on that," he said.

From the start of the excursion, Gallego says the group knew they had to keep busy and present a united front not only to the media blitz surrounding the Holiday Inn hotel that had become their temporary headquarters, but also to their constituents.

The lawmakers spent most of the four days in a hotel conference room, starting each morning with a prayer and a promise to stick with the cause.

"We looked around the table to make sure each one would commit to the others and promise that they weren't going to leave."

From there, the schedule consisted of various discussions. They'd vent frustrations over the proposed redistricting and discuss the calls they were getting from the outside, or break up into working groups to discuss blue-sky initiatives on topics such as education and energy. Members with expertise in certain areas presented seminars to the rest of the group.

"We got a lot done, and it was in stark contrast to the images you saw of people in the House chamber at the time, with beach balls flying around and music playing. Essentially, you'd see them hanging out while we were in seminars."

And, if anyone was tempted to have a drink at the bar or go to the gym, the others made sure such activities happened outside the presence of the media.

"The worst thing you can do is look like you're on vacation," Gallego says. "When you do something like this, you have to make sure you have thought of all the angles –the goal is to protect the members - and to make sure that the public knows and understands why this issue is so important, so at the end of day, the public sides with you."