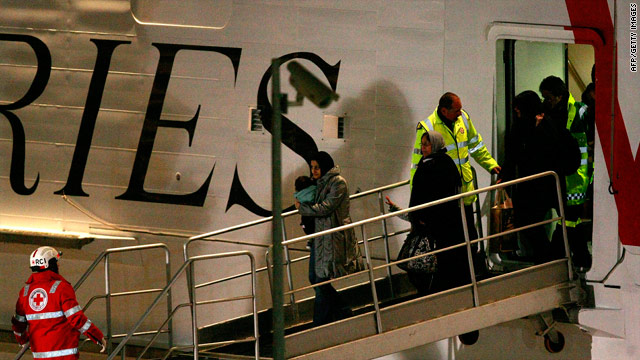 [LIBYA, 7:59 a.m. ET, 2:59 p.m. local] Mohammed Ali Abdallah of the opposition NFSL said that multiple people in Tripoli report that heavy clashes are taking place during demonstrations after Friday prayers. Protesters and security forces are fighting in the areas of Fashloom and Algeria Square. Witnesses reportÂ  snipers and artillery fire. Women and children are among the injured. Clashes also are reported in the Souq el Juma area and El Dahmani near the beach. Demonstrators are moving toward Green Square, Abdallah said.

[TURKEY, 5:02 a.m. ET, 12:02 p.m. local] Four military planes took off from Tripoli on Friday morning and landed in Turkey,Â  getting 423 citizens out of Libya, according to the Tukish Foreign Ministry. Turkish Airlines is planning at least 3 chartered flights from Tripoli to Istanbul.

[LIBYA, 5:01 a.m. ET, 12:01 p.m. local] A United States ferry with at least 275 people safely on board was expected to leave Libya at some point Friday.Â  The Department of State recommended Thursday that any U.S. citizens in Libya "depart immediately due to the potential for ongoing unrest."

"I am still in Beirut," Hassan Mushaimaa, leader of the Haq Movement, said Friday. "I was detained for hours on Tuesday. Then I wasÂ  released. I am now outside of the airport, and it would be better if IÂ  do not disclose my whereabouts."

[LIBYA, 4:02 a.m. ET, 11:02 a.m. local] In a tit-for-tat gesture, Libya and Lebanon refused to allow planes from one country to land in the other.Â  The Libyans refused to let a Middle East Airlines plane land to pick up Lebanese nationals stranded in the North African Nation, the official Lebanese news agency said Friday.

[LIBYA, 4:01 a.m. ET, 11:01 a.m. local] At a U.N. Security Council Friday to discuss measures against Libya, France said it will ask for a complete arms embargo and sanctionsÂ  against the North African nation and request that the International Criminal Court look at the violence directed at civilians there as crimes against humanity.

"The situation is dramatic, (and) even though we don't know the exact numberÂ  of victims, a lot ofÂ  things indicate that there are several hundred so there cannot be anyÂ  impunity," French Foreign Minister Michele Alliot-Marie told the France Info public radio station Friday.

The body's objective is to highlight national unity, according to the source, who is familiar with negotiations between opposition groups. It will also coordinate all revolutionary activities until the fall of what is left of the regime, according to theÂ  source.

The ship is due to arrive in the Maltese port of Valetta about 3 p.m. (9 a.m. ET) Friday, with turbulent seas making the journey longer than normal.Â  Sixty-eight of those evacuated were British nationals.

At least two people were killed, and more than 300 injured when a 5.9 magnitude earthquake struck Iran on Saturdayâ€twitter.com/i/web/status/1â€¦ZI
cnni

7:00 pm ET January 28, 2023 RETWEET
Two years after taking over the world's third-oldest club, the Hollywood superstars have become enchanted by the woâ€twitter.com/i/web/status/1â€¦yw
cnni

At least two people were killed, and more than 300 injured when a 5.9 magnitude earthquake struck Iran on Saturdayâ€twitter.com/i/web/status/1â€¦ZI
cnni

7:00 pm ET January 28, 2023 RETWEET
Two years after taking over the world's third-oldest club, the Hollywood superstars have become enchanted by the woâ€twitter.com/i/web/status/1â€¦yw
cnni