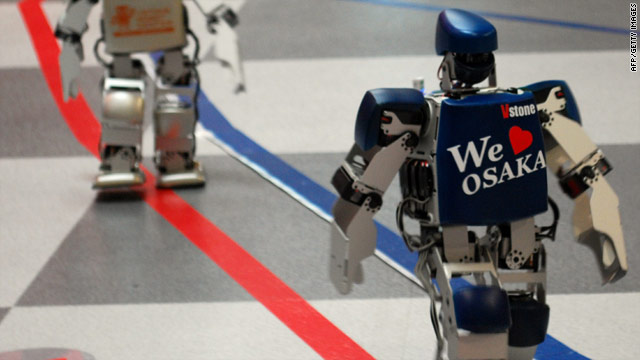 Five robots are racing around a room in Osaka, Japan, in what organizers call the world's first robot marathon.

The robots, entered by companies and universities, will complete a 26.2-mile marathon course by making 423 circuits of a track in a room in Osaka, CNET reports.

Robots that fall over will have to get back up on their own, but human pit crews can recharge batteries, according to CNET. Toughness rather than speed will determine a winner among the foot-tall robots, the report says.

Do you want to watch? The event is being streamed live on Ustream.

The president of Taiwan, where sympathy protests were held in support of Hong Kong over the weekend, vowed to "provâ€twitter.com/i/web/status/1â€¦4K
cnni

4:13 am ET May 25, 2020 RETWEET
"We're just having a bit of an earthquake here." New Zealand Prime Minister Jacinda Ardern kept her cool as an earâ€twitter.com/i/web/status/1â€¦Tb
cnni

3:45 am ET May 25, 2020 RETWEET
Astronomers believe they have observed the first direct evidence of planet birth in a young star system 520 light-yâ€twitter.com/i/web/status/1â€¦ID
cnni