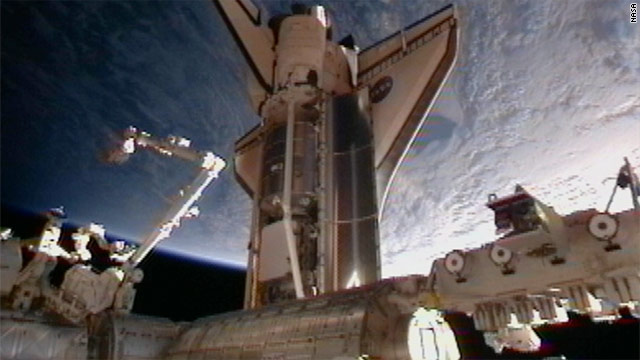 Some 220 miles above the Earth's surface, the shuttle Discovery docked Saturday afternoon with the International Space Station for the last time.

Due to problems lining up with each other, the shuttle's "hard-mating" with the permanent orbiter threatened to push the six-man crew off schedule. The hook-up was finished around 3 p.m., yet NASA's Mission Control noted a possibility that the installation of an express logistics carrier would not be completed until Sunday, one day later than planned.

Still, there were no major problems on the third day of the shuttle's 11-day mission, during which the crew is set to deliver a storage module, a science rig and spare parts to the space station and its six occupants.

He overcame deadly snakes and severe heat in an epic 4,000-kilometer skateboard journey. Via @cnnsport:â€twitter.com/i/web/status/1â€¦YY
cnni

4:01 pm ET April 13, 2021 RETWEET
It's been 100 days since the UK split from its single biggest trading partner and Brexit is proving to be disastrouâ€twitter.com/i/web/status/1â€¦Ap
cnni