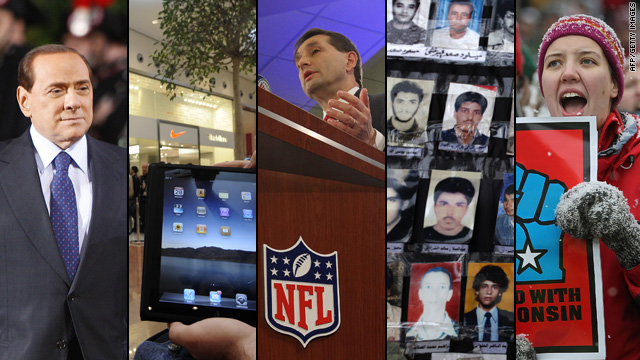 Libyan leader Moammar Gadhafi is clinging to power after another week of violence and demonstrations and an apparent shift of control in several cities to people in opposition. The United Nations  passed a resolution on Saturday night that includes an arms embargo and an asset freeze for Gadhafi and his family, and U.S. President Barack Obama said Saturday that Gadhafi needs to step down. Yet Gadhafi has showed no sign of relinquishing power, and his son Saif is saying he's confident the regime could survive the unrest. Here's a look at this and some of the other stories we plan to follow this week:

Countries discussing next steps regarding Libya

U.S. Secretary of State Hillary Clinton will be in Geneva, Switzerland, on Monday for a meeting of the U.N. Human Rights Council to discuss the next steps regarding Libya, whose government is accused of using lethal force against its people since massive protests erupted in its second-largest city in mid-February.

About 1,000 people reportedly have been killed in clashes involving protesters and security forces loyal to Gadhafi. Witnesses say several Libyan cities, especially in the east of the country, are in opposition control after days of protests inspired in part by demonstrations that toppled leaders in Tunisia and Egypt. Reports suggest that about 100,000 people in Libya have fled to Egypt and Tunisia in the past week.

Demonstrations are still rocking a number of other nations in the region. In Egypt, thousands last week engaged in a Cairo protest though longtime ruler Hosni Mubarak is no longer in power. They are urging their new rulers to implement promised reforms. Officials plan to reopen the country's stock exchange on Tuesday for the first time since late January.

Tunisia's interim government, meanwhile, is adjusting to Sunday's resignation of Prime Minister Mohamed Ghannouchi, who said he couldn't continue because he didn't want to be in a position to make decisions that could kill people. His resignation came after three people were killed during Saturday demonstrations in the capital, Tunis.

And in Yemen, the country's largest opposition bloc says it will hold demonstrations on Tuesday. This is the first time since February 3 that the group is calling on its followers to join protests against longtime President Ali Abdullah Saleh. Pressure on the president is building after clashes between protesters and security forces in Aden, Yemen, on Friday. Medical officials say four people died in those clashes.

Much of the U.S. government would begin a shutdown on Saturday if lawmakers can't agree this week on at least a short-term spending deal.

A resolution that authorizes government funding expires at midnight Friday. Lawmakers ultimately are trying to find a deal that would keep the government running through the end of fiscal year 2011, which ends September 30. The Republican-led House already has passed a spending measure that would cut $61 billion from current levels, but the Democrats who control the Senate say those cuts are too steep and won't pass them.

Both sides are talking about a deal that would authorize spending for two more weeks while cutting $4 billion. The deal would allow more time for the House and Senate to negotiate a longer-term spending plan through September 30. If no deal is reached, the government would partially shut down from Saturday until a plan is passed. National parks would close, most federal employees wouldn't get paid and applications for visas, passports and Social Security wouldn't get processed. Essential government services would continue.

None of this is to be confused with President Obama's 2012 federal budget proposal, which is another matter entirely.

Wisconsin Gov. Scott Walker is warning that state workers will be laid off if a bill that would limit collective bargaining rights isn't passed this week.

Democrats in the state Senate have left Wisconsin to avoid being forced to attend a vote on the budget-repair bill, which would curb public workers' collective-bargaining rights and raise public workers' contributions to pensions and health insurance plans. Republicans, who control the state Senate, would pass the bill, but the body can't vote without a quorum, which the Democrats' absence prevents.

The bill has sparked protests at the state Capitol by teachers and other public workers. Walker has said the bill would help the state fight a budget deficit that is projected to be $3.6 billion by 2013. Without it, he said, at least 1,500 government employees would be laid off in the short-term.

Other fights over public union benefits and collective bargaining are being waged across the United States.

NFL lockout could begin this week

Speaking of collective bargaining, the National Football League's current labor deal expires Thursday. If the league and the players' union can't come up with a new collective bargaining agreement by then, team owners could choose to lock out their players starting on Friday.

A trial of Italian Prime Minister Silvio Berlusconi on charges of tax fraud and false accounting is expected to resume in Rome on Monday. The charges are connected to an acquisition of TV rights by a broadcaster that Berlusconi owns, and the trial is resuming after a court ruled that he could not invoke automatic immunity. This is one of four trials that Berlusconi faces. The most notorious case involves accusations that he had sex with an underage female for money. He has denied the accusations.

Apple looks set to unveil its new iPad tablet on Wednesday. We're not sure what it new features it will have or what it will be called, but speculation has swirled around the possible addition of a front-facing camera that would take advantage of Apple's FaceTime video chat application.