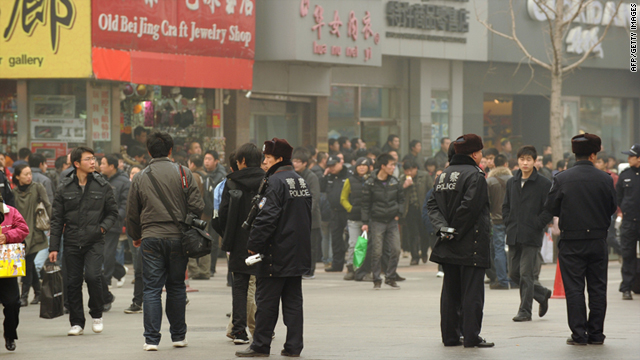 For the second weekend in a row, anonymous calls by organizers for a pro-democracy demonstration in Beijing were overshadowed by heavy security presence.

Hundreds of Chinese police officers along with more than 120 vehicles flooded Beijing's central pedestrian shopping area, Wangfujing, around the site of a second attempted "jasmine" rally inspired by pro-democracy protests in Tunisia.

There was no sign of protest as the police deployed unusual tactics to prevent demonstrations.

At least three foreign press photographers at the scene were reportedly beaten by police officers and detained. Other foreign journalists, including CNN, were manhandled, detained and escorted away from the site.