As Biden spoke at a drive-in rally in Bucks County, Pennsylvania, a group of what appeared to be Trump supporters nŌĆtwitter.com/i/web/status/1ŌĆ”ms

After emerging from voting early in-person in Florida, President Trump continued to try to cast doubt on mail-in voŌĆtwitter.com/i/web/status/1ŌĆ”bn 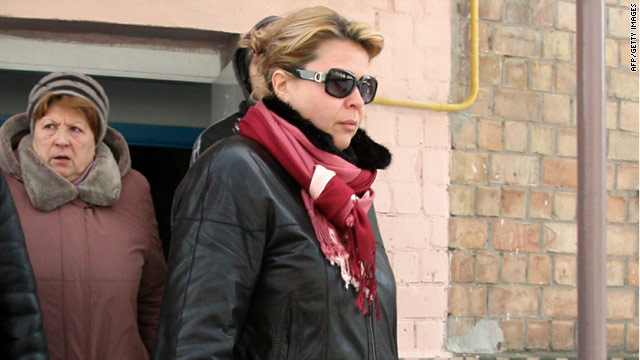 A Ukrainian nurse whose employment by Libyan leader Moammar Gadhafi was famously described in a leaked diplomatic cable is trying to avoid the media's glare upon her departure from the North African nation.

Galyna Kolotnytska, who returned to Ukraine over the weekend amid the uprising in Libya, spent Sunday and Monday at her apartment in Brovary, about 15 miles east of Ukraine's capital, Kiev. Footage from Russian TV channels on Monday showed reporters gathered outside, trying but failing to get her to talk to them.

CNN also has attempted to reach her, but her daughter said Kolotnytska is not speaking to reporters.

Kolotnytska gained notoriety in November after WikiLeaks released a cable from the U.S. Embassy in Tripoli describing Gadhafi's almost obsessive reliance on her.

The cable, under the subject line "A glimpse into Libyan leader [Moammar Gadhafi's] eccentricities," described Kolotnytska as a 38-year-old "voluptuous blonde." It discussed the lengths the Libyan leader would go to ensure that Kolotnytska traveled with him, saying that only she "knows his routine," and it also touched on rumors of a romantic relationship.

According to UkraineŌĆÖs Channel 5, Kolotnytska arrived in Kiev on Sunday morning on a plane that evacuated more than 100 Ukrainians from Libya's capital, Tripoli. Relatives met her at the Kiev airport and took her Brovary.

Russian TV footage showed she briefly stepped out of the apartment on Monday but refused to speak to reporters.

Strong winds and dry weather are fueling an explosive growth of fires in Colorado. And the weather conditions are lŌĆtwitter.com/i/web/status/1ŌĆ”aO
CNNweather

10:16 am ET October 23, 2020 RETWEET
Winter is coming early this year as two separate systems are bringing snow and ice from Washington to Wisconsin. SoŌĆtwitter.com/i/web/status/1ŌĆ”qo
CNNweather

10:18 pm ET October 22, 2020 RETWEET
More than 100 people are dead and thousands of homes have been submerged in some of Vietnam's most severe floods inŌĆtwitter.com/i/web/status/1ŌĆ”S4
CNNweather

9:24 am ET October 19, 2020 RETWEET
How much heat could you endure? Parts of the Southwest U.S. have seen their share, and then some. Check out the astŌĆtwitter.com/i/web/status/1ŌĆ”pK
CNNweather