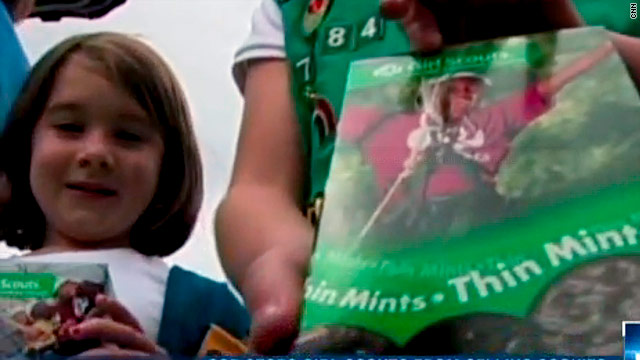 It's hard out there for a Girl Scout.

After someone complained about a Savannah, Georgia, troop selling cookies at a busy intersection in town, the city forced the girls to move away from the money-making location, according to the Savannah Morning News. The demand to move broke decades of tradition because that corner - Oglethorpe Avenue and Bull Street - is in front of the historic home of the founder of the Girl Scouts organization, Juliette Low.

Savannah zoning administrator Randolph Scott said the problem was that the girls were setting up their sale table on a public sidewalk, which violates a city ordinance, the Morning News reports. Scott tried to help, calling for a survey in the hopes that the property line near the home had private space. No such luck.

The Scouts are taking it on the chin elsewhere in Georgia and around the country. Recently in Villa Rica, Georgia - about 35 miles west of Atlanta - Girl Scouts were told they could no longer peddle their Thin Mints at a strip mall. (Watch how a cop nearly booted the Scouts from their favorite spot. "He was scaring us," one of the girls said of the officer.)

And in this economy, the governing body of the Girl Scouts in Texas is adjusting sales methods. At least a dozen troops across the country are offering only six varieties of cookies rather than the usual eight, according to KVIA TV in El Paso. The price of Samoas and Tagalongs has gone up in some areas to $4 a box, the station reports. It's still a little too early to tell how well newly introduced cookies - "Thanks-a-Lots" and "Shout Outs!" - will sell or if some troops' use of new eco-friendly boxes will boost sales.

At least one girl has not been deterred from her cookie mission. Lydia Johnson, 7, and her mother, Susanne, of South Florida, have reportedly sold 2,053 boxes this year. "We're like twins," Susanne Johnson said. "People like it, and it is fun."

COP26 is fast approaching and the whole world seems to be talking about the climate crisis -- but the terminology câ€twitter.com/i/web/status/1â€¦fj
cnni

3:37 pm ET October 15, 2021 RETWEET
Though summer rainfall brought some relief to the Southwest, the unrelenting drought there is about to get worse wiâ€twitter.com/i/web/status/1â€¦Np
CNNweather

2:46 pm ET October 15, 2021 RETWEET
Vaccine advisers to the US Food and Drug Administration have voted unanimously to recommend a booster dose of Johnsâ€twitter.com/i/web/status/1â€¦dV
cnni

2:30 pm ET October 15, 2021 RETWEET
Throughout August, the risk of dying from Covid-19 was 11 times higher for unvaccinated adults than for fully vacciâ€twitter.com/i/web/status/1â€¦1s
cnni