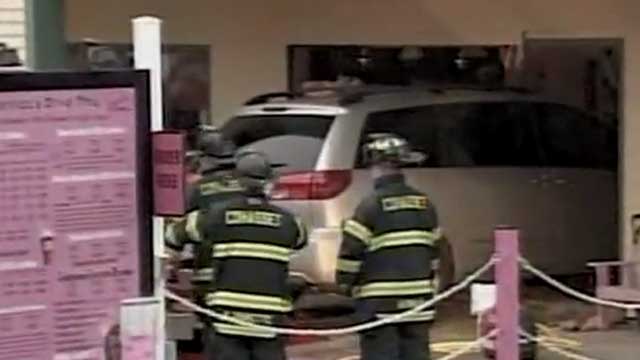 Minivan leaves Venti-sized hole in coffee shop – The owners of a Massachusetts coffee shop have never been happier for a slow morning. Late last week, a woman accidentally turned Mary Lou’s coffee shop into a drive-thru business, sending the smell of fresh brewed coffee wafting into the parking lot.

Objects in the rearview mirror may be vengeful – A Florida woman had a bad feeling about leaving her purse on her car seat while she paid for gas. Sure enough, when she came out her window had been broken and the thieves were driving away. Surveillance camera shows the woman’s desperate attempt to stop the thieves using her own body as a barrier.

So you think you love movies? – This guy proves his passion for film by opening an independent theater in Washington. Independent movie theaters have become a rare breed as giant megaplex cinemas have taken over, forcing out some of the more obscure films.

Remember when crack was new? – Well, it’s 25 years later and just saying no to drugs hasn’t exactly kicked America’s drug habit. Here’s your video flashback from 1986 where first lady Nancy Reagan tells us how to confront a situation in which we are offered drugs.